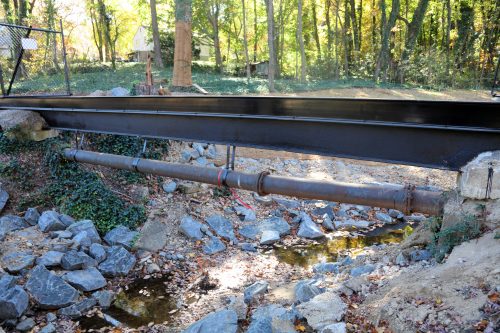 The Prince William County Service Authority (PWCSA) has teamed up with the county government to complete water protection and wastewater system projects.

According to a release, the county began work on restoring a portion of Marumsco Creek near East Longview Drive in Woodbridge, and PWCSA also took part, fortifying a 10-inch sewer main that crosses the area.

Because of continuing soil erosion and storm water runoff from the Route 1 area, the exposed section of sewer main was at risk of being compromised during a large storm event. As the stream banks were being restored, it necessitated lengthening the beam that supported the sewer main. Service Authority crews accomplished this by attaching a new beam on top of the old one that extended 15 additional feet on either side of the stream.

The two-week project was completed in early November with the County expecting to complete its stream restoration project in the coming weeks.

“The fact that we can protect our infrastructure as well as the environment with this project made this a win-win situation for us,” said Operations & Maintenance Director Don Pannell.

The Service Authority had already taken steps to protect the same infrastructure along the creek in 2012. Over time, a manhole near the elevated sewer line had been exposed by runoff from surrounding properties and rising creek flows during large storm events. To help remedy the issue, the Service Authority placed jersey walls in close proximity to the elevated sewer main in order to better protect the manhole and sewer line.

In spring 2017, the County will embark on another stream restoration project at Dewey’s Creek in Dumfries that will have a positive impact on both a Service Authority sewer line as well as a nearby sewer lift station situated close to Route 1.

A storm water detention pond is currently releasing water through a culvert underneath Wayside Drive into Dewey’s Creek. Over the last five years, flow from the pond has eroded the hillsides enough to potentially expose a Service Authority gravity sewer main that runs just above a small waterfall that feeds into the creek.

As a result, the County will install a pipe that will funnel the water at a more moderate angle into the stream and then backfill the waterfall area. As part of the project, the County will also realign the stream away from a manhole that sits only a few feet from the current edge of the creek. The manhole is located behind a Service Authority sewer lift station that helps pump sewage to the H.L. Mooney Advanced Water Reclamation Facility in Woodbridge.