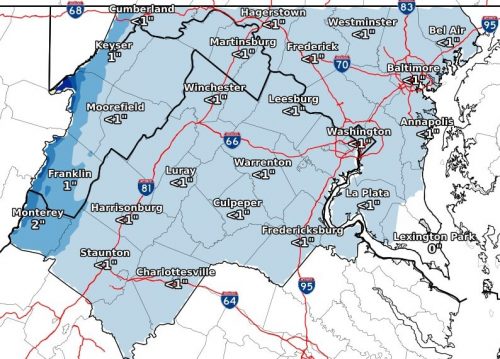 Between 3 p.m. and 9 p.m. today a wintry mix is expected to move through the area, causing issues with the evening commute, according to the National Weather Service (NWS).

“The primary threat will be light ice accumulation from sleet and freezing rain that freezes on contact with extremely cold ground surfaces,” stated NWS.

According to a release, the schools will be let out in a staggered release, three hours ahead of their normally scheduled dismissal time.

PWCS Supervisor of Community Relations Irene Cromer stated that SACC will be closed, all evening activities are canceled, and the schools will serve lunches to students to the “best extent possible”.

There will also be a Code Red for PWCS employees at 2 p.m.

As of right now, Manassas City Public Schools will not be releasing students early.