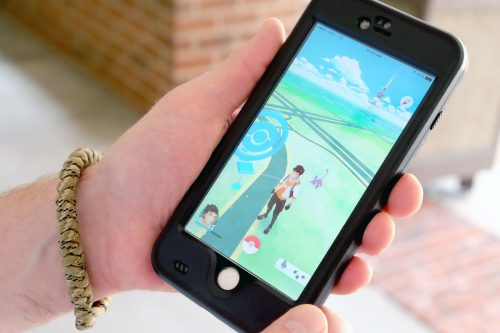 The Prince William County Police Department wants to remind all Pokemon Go players to be careful when outside catching Pokemon.

People out looking for Blastoise, Wartortle, Pikachu, Spearow, Jigglypuff or any other Pokémon might run into trouble if they don’t pay some attention to the real world while playing Pokémon Go, the augmented reality game.

Pokémon Go players need to go outside to hunt the little virtual creatures called Pokémon using GPS on their smart phones. The game gives players locations where Pokémon might be hiding out and maps on how to get there. Game players then go to the hotspots to catch the Pokémon on their phones.

The craze to catch Pokémon has led people to ignore what is going on around them. There have been stories of players wandering into roads and reports of close calls with traffic. People have even stumbled on or walked into stationary objects while on the hunt.

Prince William Police Spokesman Jonathan Perok said people should look up from their phones and take note of what’s going on around them. “This game’s interactive, and we want people to be safe while playing it. We’re seeing people who are…too focused on the phone itself. They’re too involved into where the map is telling them to go instead of looking ahead. They’re basically presenting safety hazards to themselves by not paying attention to their surroundings.”

Perok said it seems like common sense, but there have been reports nationally of people playing the game while they’re driving. “We’ve heard of instances where people have crashed into police vehicles while playing the game. Don’t play it while driving. Don’t even play it while riding a bicycle. It’s best to use your two feet and play it that way.”

Trespassing has also been a bit of a nuisance to some property owners since the creatures are generated randomly and can appear anywhere, Perok said. “We always want people to be safe. We want people to go to an area park, an area shopping center or somewhere that is open to the public. What we’ve been seeing is people trespassing on peoples’ lawns, private property, even government buildings and things like that. Don’t ever go into a restricted area.”

Perok said people should absolutely have fun playing the game, but they should also take care and notice of what’s around them.