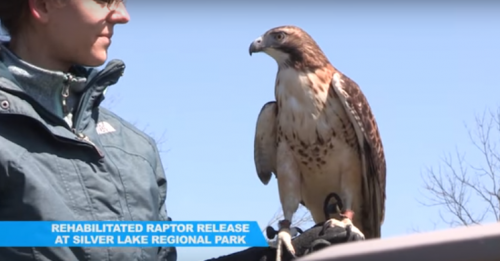 It was the afternoon of January 3 when Karen Shumake, a park ranger for the Prince William County Department of Parks and Recreation, heard a police dispatch call about an injured hawk off of U.S. 29, according to a release.

Shumake rushed to the scene, and found an injured female red-tailed hawk in the road median, stated a release. With some help from a county resident, and county animal control officer Steven Neff, the hawk was safely rescued from the road, according to a release.

More on the hawk’s rehabilitation, from a release:

Shumake is a 13-year county employee, who happens to volunteer with the Raptor Conservancy of Virginia in Falls Church. She knew just where to take the bird for help.

Gabby Hrycyshyn, the executive director of the conservancy — which rehabilitates injured or sick owls, hawks, falcons and eagles — helped care for the hawk, which experts at the conservancy determined was hatched in the spring of 2015.

Hrycyshyn said people at the conservancy examined the bird, which was most likely hit by a car, and found that it had clean break in the middle of its humorous that was able to be surgically repaired.  “We do an intake exam where we feel the bones in their wings, the bones in their legs; check them for any obvious signs of trauma. In this case what we found was a broken left wing.”

After the bone was surgically set, the conservancy’s surgeon wrapped the hawk’s wing against its body and it stayed that way for a month, Hrycyshyn said. Then there was physical therapy where conservancy rehabilitators regularly extended the wing to its full extension to stretch and strengthen atrophied muscles. After physical therapy, the raptors are transferred to 40-foot flight cages where they are evaluated to see if they’ll be able to fly, hunt and survive in the wild again. “Gradually, over time, they get better and better, stronger and stronger, and this bird is rocket. She’s ready to go,” Hrycyshyn said of the hawk.

Once the hawk’s injuries had healed, the hawk was released at the Silver Lake Regional Park in Prince William, cheered on by a group of students from Ronald Wilson Reagan Middle School, according to a release.

While Shumake was happy that the hawk has been released back into the wild, she is also sad to see her go.

“I went to go see her pretty much every weekend. It was both sad and happy. I became kind of attached to her, but I was very, very happy to see her go back to her natural environment,” stated Shumake in a release.