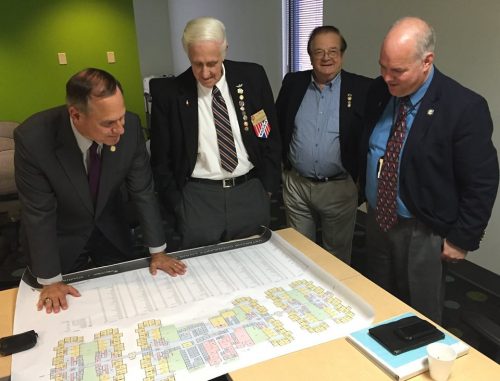 A site on the Prince William and Fauquier County line has been selected for the incoming Northern Virginia Veterans Care Center.

According to Delegate Richard Anderson, the center will be a 120-bed facility that will create around 150 jobs.

In 2015, Anderson was instrumental in passing two bills in the Virginia House of Delegates that led to impending construction of the Northern Virginia Veterans Care Center, and another center in the Hampton Roads area.

The two facilities are expected to cost $96 million, according to Anderson.

“It is not like a VA (Veterans Administration) hospital…think of a nursing home for veterans who need a high degree of care,” said Anderson.

The Northern Virginia Veterans Care Center will be located at Vint Hill Farms Station, which was formerly a joint National Security Agency (NSA)/U.S. Army signals intelligence facility that closed in the 1990s, according to Anderson.

Fauquier County donated the 30-acre site to Virginia for the construction of the care center. Last year, there was intense competition between localities to have the facility located in their area.

“There were three localities in Northern Virginia competing. One was Prince William, one was Stafford, and one was Fauquier…in order to compete, the locality had to donate the land, and the state requires at least 25 acres to construct,” said Anderson.

“It’s a little more centrally located, to Loudoun County veterans and so forth. And while I would have liked to have had it in Prince William…I fully understand the final decision of the Commonwealth to locate it in Fauquier because with that 30 acres, which bested us by 3 acres, that offered potential future expansion acreage as the veterans population increases,” said Anderson.

Anderson expanded on the unconventional decision that Virginia made to fund the construction cost for the project.

“Normally the federal government pays about two-thirds cost through the VA budget – the Veterans Administration budget – and the state picks up the remainder, but we’ve been on a waiting list for nearly 10 years, waiting for the feds to give us their share of money…the House leadership and the Governor got together, and talked about a way ahead, and they reached an agreement that Virginia would just bite the bullet and pay 100% of the cost, because we just have so many veterans that are in need of care,” said Anderson.

Virginia plans to apply to the federal government for reimbursement for the two veterans care centers, but that money is not guaranteed, said Anderson.

For Anderson, building the facilities are important to meet the needs of the growing veteran’s population.

“It’s important to me because the Veterans Administration, federally, just can’t accommodate the large number of veterans that now require care after a protracted period of war…we’ve generated a lot of veterans, who as they age, they have needs, and this a perfect facility for them,” said Anderson.

Groundbreaking on the facility is planned for late 2017, with an estimated completion date of 2019, according to Anderson.