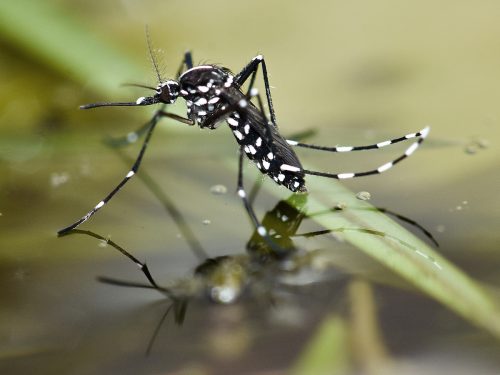 Be prepared: ‘mosquito season’ is coming, 13 cases of Zika virus in Virginia

The county wants you to be ready for mosquito season, especially with growing concerns about the Zika virus.

There have been 13 confirmed cases of the Zika virus in Virginia, five of those cases being in Northern Virginia, according to a release, but all of the cases originated outside of the United States.

According to a release, while there have been no cases that have originated in Virginia, the Health District and the Department of Public Works have made it a mission to be prepared, and have created a plan to deal with the virus as though it were an emerging infectious diseases.

More on how to be prepared for mosquitoes, from a release:

During a recent presentation to the Board of County Supervisors, Tim McGonegal, the county’s Mosquito and Forest Pest Management Environmental Services Branch chief, said that the Asian Tiger mosquito is an aggressive biter that is active in the daytime.

Mosquitos can lay egg in as little water as a bottle cap can hold.

“We need a lot of help from the public in dealing with this,” McGonegal said. “We can take care of a lot of the natural mosquitos in natural setting. It’s the ones in your backyards that we can’t deal with.”

Residents are also encouraged to wear protective clothes to reduce exposure to mosquitos, such as long, loose and light-colored clothing; and the Health Department recommends using insect repellent products with no more than 50 percent DEET for adults and less than 10 percent for children. Follow label instructions when using insect repellents.

Public Works will see to mosquito surveillance and control, along with getting out information about how residents can control mosquitos around their homes, while the Health Department will provide details on health, safety and transmission of the disease.

Dr. Alison Ansher, of the Prince William Health District-Virginia Department of Health, told the board that the Zika virus is primarily spread to people through the bite of an infected mosquito that has previously fed on another infected person. Evidence also shows that Zika can be sexually transmitted, as well. The virus remains in the body for about a week and can pass from pregnant mothers to their babies.

People who suspect that they have been infected should stay indoors or wear mosquito repellent and protective clothing during the first week of illness to prevent the threat of transmission to others. Signs of Zika, though not always present, include rash, fever, joint pain, headache and reddish eyes. “Most people are asymptomatic and have symptoms that are similar to everyday issues. That’s kind of the challenge because these asymptomatic people can certainly infect our mosquitos, which then can infect our residents here.” People who exhibit such symptoms after traveling to localities where the Zika virus is present, should also practice safe sex or abstinence, Ansher said.

Ansher said the Zika landscape changes daily so people should keep abreast of the situation by visiting www.cdc.gov/zika. “Zika virus infection is an emerging disease; so, that means we’re learning a lot every day.”