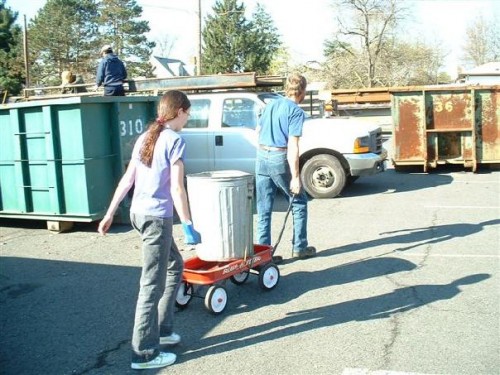 Worried about litter and trash, now that the weather is warming up? You’re not alone.

According to New Woodbridge, the Prince William Department of Public Works is coordinating several activities to help maintain the beauty of the community.

More on what’s going on, from New Woodbridge:

Two four-man teams each work separate ends of the County. For spring, the amount of roads cleaned per day has been increased to two roads per day per team in anticipation for large amounts of trash and debris due to high winds. This schedule will last until the end of May. Every Friday will be reserved for resolving citizen request/complaints, responding to cases from other agencies and cleaning dump sites. In June the litter crew will return to walking two roads per day per team.

Several times a year on Saturdays, Public Works sponsors the Dumpster Day Cleanups. The litter crew creates the schedule, coordinates the dumpsters with Solid Waste and will also staff the cleanups from 8 am to 12 noon. Ten to 12 Dumpster Day cleanups will be scheduled this year; the schedule is TBA.

Adopt a Spot and Adopt a Stream Sign Installs

Public Works will be coordinating with Keep Prince William Beautiful (KPWB) and Virginia Department of Transportation to create the plans, permits and installation schedules for Adopt a Spot/Stream signs. Currently two signs are scheduled for installation at the end of March.

The litter crew arranges the vehicle, schedules the dates, and drives the KPWB and volunteers around the County for the litter survey sponsored by Keep America Beautiful (KAB), which rates the effectiveness of County efforts to rid communities of trash, litter and debris. The next litter survey is scheduled for Mar. 30, 2016.

Other projects the litter crew manages are the maintenance of the chain link fence along Jefferson Davis Hwy to include cutting back any over growth of vegetation. The litter crew also helps to conduct quarterly landscaping surveys which rates the citizen satisfaction with County contractor services.

The landscaping plan will consist of mulching twice annually, pruning trees, repairing of beds, reseeding grassy areas damaged by plows and replacing of plant material such as flowers and shrubs. The regular maintenance schedule will be on a bi-weekly basis. There are currently two new landscaping projects planned for this spring. The first consist of tree removal along Touchstone Circle and Dale Blvd. The medians along Touchstone Circle will be replanted with low-laying plant material to include, bushes, flowers, ground cover and ornamental grasses.

For information on the Department of Public Works (including how to report various issues), visit them online.