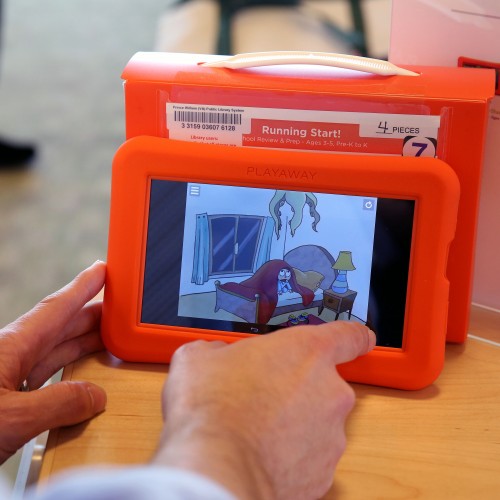 Learning for young children in Prince William just got a little more fun.

The county’s two new libraries – the Montclair and Haymarket-Gainesville Community libraries – are now allowing families to check out ‘PlayAway’ launch pad tablets that come pre-loaded with electronic books, puzzles and games, according to a Prince William County release.

Between the two libraries there will be 210 of these tablets. The tablets are meant to be used with infants, up through fifth grade, according to a release.

“It’s a pre-loaded tablet that comes with different types of apps. All of them come with three or four books. They come with games. They come with learning devices, so that the child is tested on how they’re learning,” stated Prince William Public Library System employee Ayo Dayo, in a release.

More on the tablets, and how to check them out, from a release:

Library patrons simply need to place a hold, or reserve, titles that interest them. The tablets can be checked out for seven days at a time, and checkouts can be renewed up to four times if there are no holds on them.

The bright orange tablets, which are only sold to schools and libraries, have been tested for durability, Dayo said. The devices can take just about any punishment children can dish out including drops and spills. “They are pretty sturdy. They can drop it, mishandle it, whatever. We have tested them. We’ve dropped it. The only thing we ask is that you don’t put a hammer to it or anything of that nature.”

Dayo said the tablets are intuitive and won’t present any problems to today’s tech-savvy children. “Most little kids will know how to work this. It won’t be a problem because they’re used to working iPads or any other kind of tablet. Most parents don’t have to worry about how it operates because the kids know.”

The education-based devices are also tamper-proof, Dayo said. “Parents don’t have to worry. These are self-contained, so you cannot load anything on them and you cannot take anything off.”

The tablets are recharged and reset each time they are returned to the library, and the kit comes with a charger. Recharging takes about four hours, and the device can be used while being recharged.

For more information about programs at the libraries, visit www.pwcgov.org/library.