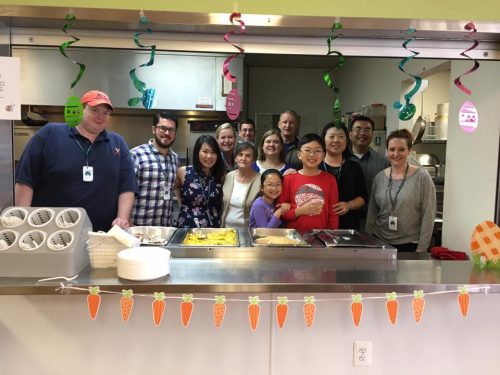 Prince William lawyers ‘SERVE’ up breakfast to people in need

When they’re not serving up justice, a group of Prince William County lawyers are serving up breakfast to people in need at the SERVE shelter in Manassas.

According to Chair of the Young Lawyers Group for the Prince William County Bar Association Bradley Marshall, the lawyers and other volunteers have been cooking breakfast for shelter residents on the last Sunday of every month for the past four years.

“One of core missions is to be involved in the community and give back to the community, and this was a need that arose, that we filled, and it was a good match between our volunteer base and our mission…the Bar focuses on community service in a lot of different ways, mostly focused on children education, and underprivileged people in the community,” said Marshall.

Marshall said that the breakfasts are funded with a $2,400 grant that is given to the group each year by the Prince William County Bar Foundation. Every month they’re able to serve food to up to 80 residents, according to Marshall.

“So we buy the food, donate it, go and prepare it, and serve it to the residents,” said Marshall.

The Young Lawyers have had more than 100 volunteers participate over the years.

“We encourage [Bar] members to bring their families, to bring their people they work with…we’ve had judges – from all levels of court – that have volunteered, from all three local courts, plus the State Court of Appeals,” said Marshall.

Marshall recalled a story that he heard from an area judge that had volunteered at one of the SERVE breakfasts with her son.

“It’s really important to a lot of our members to expose their kids to some things that they might not even think exist in their community – that only exist on T.V. Lawyers’ kids tends to lead a rather privileged life and their parents recognize that…a lot of people don’t even think there are homeless people in this community. I remember one of the judges telling me, after she left with her son one day, a teenage boy. They were driving home and it was quiet in the car. And she said ‘That’s very strange for a teenage boy’, and after a long silence, he turned to her and said, ‘You know what mom, we’re lucky’. She turned to him and said ‘Why is that?’ And he said, ‘Because we can go to the refrigerator and get food any time that we want, and not everyone can do that.’ And that was kind of a lightbulb for him,” said Marshall.