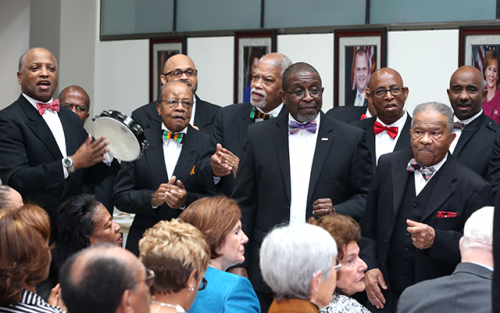 Several individuals in Prince William were recognized for their involvement and commitment to human rights causes.

Prior to awards being given, Jacquie Jones – an award winning film maker – spoke about “Blacks in the Media”, according to a county release. Additionally, many local elected officials including Supervisors Marty Nohe, Ruth Anderson and John Jenkins, attended.

Here are this year’s award winners, according to a release:

Dr. Alice Howard – An educator who served as a teacher, principal, administrator, professor and superintendent; founder and organizer of the Prince William chapter of the National Coalition of 100 Black Women.

Rex Parr – Dedicated his life to making a positive difference in the lives of others; became president and CEO of Didlake in 1977, providing vocational and training services to persons with disabilities through vocational training, behavioral support, community integration and employment services.

NAACP – “Ban the Box” Initiative petitioned the Prince William Board of County Supervisors to remove the question on convictions from initial government employment applications in order to allow more access to employment opportunities.

Pastor Keith Savage of First Baptist Church in Manassas said that the celebration was a great way to promote a sense of community.

“This is a great opportunity for us to realize that we are our brother’s keeper. We are neighbors, and Human Rights Day is about remembering that we have a shared connection. We’re all one people; and we should be trying to love and take care of one another. We need to make sure everyone’s rights are respected, that everyone’s rights are valued,” stated Savage in a release.