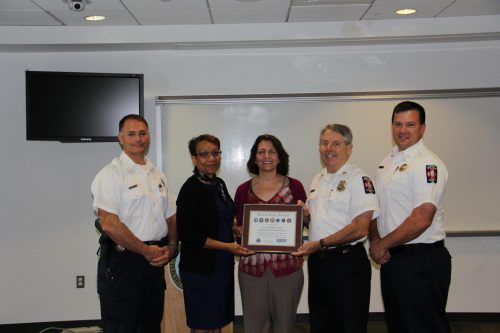 The Prince William County Department of Fire and Rescue (PWCDFR) was recognized for their work with the Employment Support of the Guard and Reserve (ESGR).

ESGR is a United States Department of Defense program, which seeks to “promote cooperation and understanding between Reserve Component Service members and their civilian employers and to assist in the resolution of conflicts arising from an employee’s military commitment,” according to their website.

According to a release, ESGR presented the department with the Seven Seals Award, to recognize the department’s cooperation and support of their employees, which include current and former members of the National Guard and Reserves.

“The Seven Seals Award is the broadest and most inclusive award given and presented by the ESGR in recognition of significant individual or organizational achievement, initiative, or support that promotes and supports the ESGR mission — to foster a culture in which all employers support and value the employment and military service of members of the National Guard and Reserve in the United States,” stated a release.

“The Department values the dedication and sacrifice of its members, and all Service members, who depart the comforts of their home to answer the call of duty to protect our country, our citizens and our freedoms, while acknowledging the 4500+ men and women, an All-Volunteer Force, who, daily, support our military service members and their families via ESGR’s mission. It is an honor and privilege to be a part of the ESGR program and the recipient of the prestigious Seven Seals Award,” stated McGee in a release.