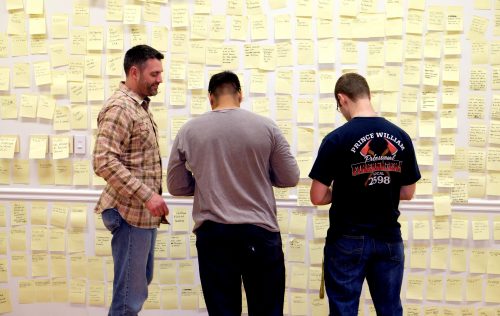 The county is continuing to conduct a SWOT analysis on the fire and rescue system to identify how they can improve.

According to a release, the SWOT analysis is meant to identify the Prince William fire and rescue system’s strengths, weaknesses, opportunities and threats, for both career and volunteer units.

The analysis has been conducted at a number of public meetings, where participants have written notes about the fire and rescue system’s strengths, weaknesses, opportunities, and threats are, as well as notes about how they could improve, stated a release. According to a release, the participants would post all of the notes on the wall during the meeting, so others could see key themes and ideas.

“The directive to examine how to reform the fire and rescue system came after two volunteer fire companies were merged into the Prince William Department of Fire and Rescue due to their inability to maintain the level of service contracted by the Board. The Board expressed their strong desire to maintain a combination system with volunteer and career fire and rescue members providing the necessary public safety support that the residents deserve,” stated a release.

According to a release, the individuals identified 27 categories of ‘threats’ to the county’s fire and rescue system.  “Some of the categories identified included regulations, apparatus, reform committee, leadership, relationships, staffing, training academy and the SWOT process itself,” stated a release.

“It’s really about getting input from all stakeholders so that we can see certain themes that we may not have seen without their input,” stated Acting County Executive Chris Martino in a release.

The final SWOT meeting will be held tonight at the Buckhall Volunteer Fire Station at 7190 Yates Ford Road and is open to the public, stated a release.