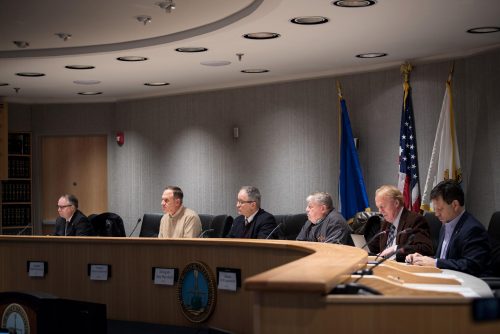 The McCoart building was packed on Saturday, with residents attending the General Assembly Town Hall.

The Town Hall was a chance for elected officials from the Prince William delegation to share their legislative priorities for the session – which begins next week – and hear from residents about issues that matter to them.

Surovell highlighted his legislation to enforce stricter penalties for distracted driving and recycling coal ash. For Barker it was increasing mental health services and establishing a Metro Safety Commission.

Marshall outlined legislation he is proposing for personal privacy protections, studies on the long-term effects of marijuana and heroin use, and declaring pornography a public health hazard. Anderson stated he would be supporting legislation to protect firefighters who are being exposed to elements that cause colorectal cancer.

Bell’s legislative priorities included limiting access to opioids to curb substance abuse and improving cybersecurity measures to prevent online harassment and bullying. Lingamfelter spoke about his focus to work on next steps for the state’s $1.5 billion budget shortfall.

While some of these priorities were echoed in the comments from residents, several other community and state-level issues came to light when residents spoke.

“We still have 11,000 people waiting for a Medicaid waiver. And some of those families are very desperate. We support several thousands of them through the ARC services – either residential, day services, or even in our education program – and these folks are needing your help and support,” said Smith.

Bruce Smith, a representative for AARP, spoke about the challenges Virginia workers face when planning for their retirement.

“AARP Virginia is fighting to put a secure retirement within reach for people who work hard and plan for their future. The expectation of a comfortable retirement is no longer a reality for far too many Virginians. Instead thousands face the risk of running out of savings after they retire…73% of surveyed Virginian voters agree elected officials should set up a state-run [retirement] savings plan, so all workers can have an opportunity to save,” said Smith.

“The average salary for Virginia educators is more than $7,000 below the national average – ranking us 30th in the nation. 30th is not competitive. 30th makes the best teachers think twice about coming to Virginia. Too many teachers must work second and third jobs to survive. This is unacceptable,” said O’Casey.