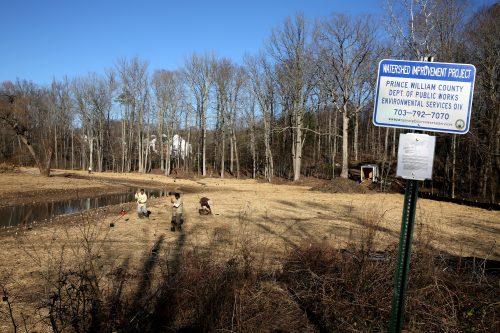 Members of Prince William County Government, the Town of Dumfries, and the U.S. Fish and Wildlife Services (USFWS) worked together to restore 400 feet of Dewey’s Creek.

According to a release, the work was done on the upstream of the creek from a culvert on Possum Point Road near the Prince William-Dumfries line, as way to prevent flooding on the road.

Workers planted trees along the banks of Dewey’s Creek as part of the stream restoration project.

The work was completed with a $297,000 grant to the Town of Dumfries, $300,000 from the Prince William County Department of Public Works, and additional funding from USFWS through the Hurricane Sandy Disaster Relief Act of 2013, stated a release.

Tom Dombrowski, environmental engineer with the Prince William County Department of Public Works, said the county was already at work on a stream restoration design at Dewey’s Creek when the USFWS determined that the culvert that lets the creek pass underneath Possum Point Road was a potential problem.

The Possum Point Road culvert, Dombrowski said, was clogged with sediment and represented a hazard to property and the road because it was likely to cause flooding under severe storm conditions. “The USFWS and the town wanted this culvert passage to be clean and clear. Since we’re doing a stream restoration design all the way from Route 1 coming down to Possum Point Road, a partnership between us was created.”

A USFWS press release stated that potential damage from flooding over Possum Point Road caused by a combination of excessive water and a blocked culvert could cause an estimated $3.13 million in emergency repairs for Prince William County and the Town of Dumfries. “They considered it a fish obstruction, and also considered it a potential infrastructure hazard,” Dombrowski said. “So, if a major storm event occurred, they believed that the obstruction could have created a situation where the creek could have overtopped and flooded the road. If that happened, it would strand everyone from Dominion Power and all those homes east of Possum Point Road Dewey’s Creek Culvert. This could also prevent access for any emergency vehicles to the stranded citizens.”

Prince William County, along with the rest of Virginia and several other surrounding states, is in the Chesapeake Bay Watershed and is governed by the Environmental Protection Agency regulations. Those regulations dictate how much sediments are permitted to flow into the bay daily from a given area. It is the responsibility of local governments, like Prince William County, to meet federal and state regulatory requirements through projects such as stream restoration. While jurisdictions are bound by law to pay for the projects, the county’ Department of Public Works has been able to take advantage of several grants to help pay for a number of projects across the county.

For more information about stream restoration or information on how you can help with stream issues, please contact the Prince William County Department of Public Works, Watershed Management Branch, at 703-792-7070.