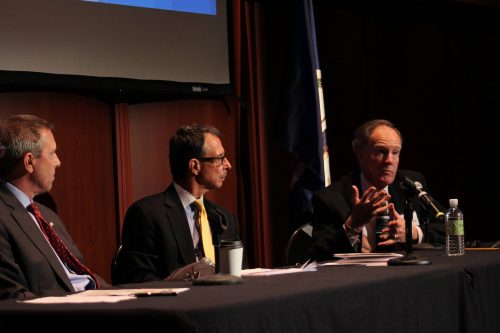 Prince William County is becoming synonymous with economic development and growth in the Northern Virginia Area.

According to the Prince William County Department of Economic Development, the 2016 State of the Commonwealth Report states that the county’s economic contributions account for 45% of the state’s total economic activity and 37% of all employment.

More on Prince William’s economic development, from a release:

In the last five calendar years [2011-2015], projects closed by the Prince William County Department of Economic Development alone intend to invest a record $2.7 billion and to create 2,900jobs.  2015 was the fifth year in the Department’s history that it logged over half of a billion dollars in capital investment, with $660 million and more than 600 new jobs.

“Twenty years ago Prince William County recognized the importance of Economic Development and dedicated a new Department to work on defining a roadmap to its future,” said Corey A. Stewart, Chairman, Prince William Board of County Supervisors. “Today, we are realizing the benefit of laying the foundation for a prosperous economy and continue in our dedication to raise the bar higher for our business community and citizens by delivering on increased capital investment and high-paying, highly-skilled jobs.”

“By concentrating in life sciences and information technology we are creating growth opportunities that are opening up new markets and new types of business opportunities, influencing other technology sectors and the region, as a whole,” said Jeff Kaczmarek, Executive Director, Department of Economic Development, Prince William County.  “The County’s growth is owed in part to its strategic location and excellent competitive edge, such as a ready supply of highly-educated young professionals, affordable and available land and competitive labor costs, all of which result in a strong value proposition.”

By all indications, Prince William County’s ability to generate job opportunities within its boundaries is expected to continue into the foreseeable future, based on the latest round of estimates released by the Metropolitan Washington Council of Governments.  According to those projections, job growth in Prince William County is expected to outpace that of any of the other observed localities in the metro area.  Over the 30-year period, 2015-2045, the County is expected to add an additional 114,000 jobs – an almost 80% increase.

Want more Prince William County?  Check out our latest video, sign-up for newsletters or visit us at: www.PWCEconDev.org or @PWCDED.