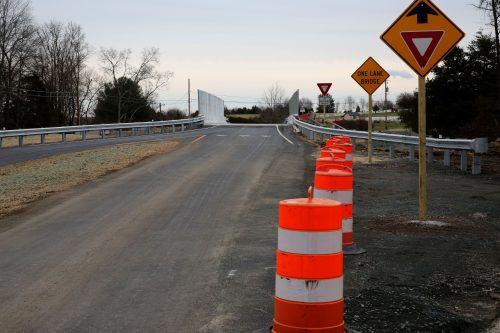 Over the course of 2016, the Prince William County Department of Transportation has completed around $148 million in road projects.

The following are completed road projects, from a release:

Here are currently projects being completed in Prince William, from a release:

Burwell Road: Paving of 2,400 linear feet of Burwell Road to the Fauquier County line is scheduled to begin in late summer 2017 and is expected to take two weeks.

Dumfries Road: Authorization to begin work to build southbound dual left turn lanes on Dumfries Road at Hoadly Road was issued in September. Preliminary plans for the project have been submitted to the Prince William and Virginia departments of transportation. The preliminary schedule for project completion is set for September 2018.

Antietam Road Sidewalk – Right-of-way acquisition and land use permits have been granted by VDOT. Construction on the project between Old Bridge Road to Woodfern Court is scheduled to begin in January and finish by the end of July.

Old Bridge Road Sidewalk – Design plans have been submitted to VDOT and the Prince William County Department of Development Services and are currently under review by county staff and the design consultant. Construction is scheduled to begin next summer and finish in December 2017.

Dumfries Road Shared Use Path – Construction on the shared use path on Dumfries Road between Exeter and Tally Drives is scheduled to begin in May.

Blackburn Road Pedestrian Improvements – A notice to proceed with the design for the improvements is expected later this month.

Powell’s Creek Pedestrian Footbridge – Construction on the footbridge is scheduled to begin later this month with the completion date set for July. However, construction could be delayed if it is determined that the project poses a threat to the Northern Long-Eared Bats.

And here’s an update on some Virginia Department of Transportation projects in Prince William, from a release:

Route 1- Va. 123 Interchange:  Work on a retaining wall on the project to build Va. 123 bridge over U.S. 1 in Woodbridge is ongoing. Clearing at the north end of the project is underway and pile driving for the bridge is expected to begin soon.

Aden Road Bridge: The bridge crossing is open in an interim condition. VDOT is awaiting information on how to proceed with the old bridge truss.

Route 1 Widening – Town of Dumfries: Design for the project to widen U.S. 1 between Va. 234 and Brady’s Hill Road in the Town of Dumfries is partially funded, a survey is complete and a kickoff meeting has been held. Design is underway and a pre-field inspection is expected to take place in the spring of 2017.

Route 234 Pedestrian Improvements: Funding has been identified to build a sidewalk along Va. 234 between Four Seasons Drive and Fortuna Center Plaza. An advertisement for bids is expected to go out next spring.

Dale Boulevard: Design is underway to add a left-turn lane at Hillendale Drive and utility conflicts have been identified. Bids for modification of the Interstate 95 – Ashdale Plaza ramp have been received.

Old Centreville Road: Major bridge rehabilitation is needed over Bull Run. VDOT recently advertised for bids, which came in higher than expected. The job has been re-advertised.

Blackburn Road-Rippon Boulevard: A survey has been completed to add a traffic signal at the intersection. Rights-of-way acquisition are scheduled to begin next spring.