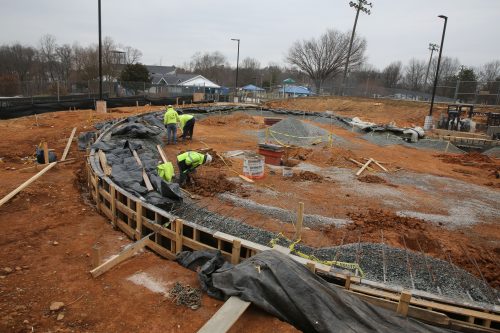 While sitting by the pool may be the last thing you’re thinking about, with temperatures hovering in the teens in recent weeks, Prince William is continuing work on the children’s water park in Dale City.

According to a release, crews are working on the children’s pool at Andrew Leitch Park at 5301 Dale Boulevard, in order to have the new water park ready for opening on Memorial Day Weekend.

More on the work, from a release:

The old pool and water features were “completely outdated,” according to Amarjit Riat, the Prince William County Department of Parks and Recreation project manager overseeing the project, and there were numerous times the pool was shut down to make repairs. “It was 23 years old and there was a lot of maintenance we had to do.”

The old pool was closed in September when demolition started and will be replaced by a “brand-new water park,” Riat said of the project that is a zero-depth facility. There won’t be a pool, but instead there will be multiple water features to entertain children. Those features include Misty Mountain, Sneaky Soaker, Bloomin’ Soaker, Geyser, Solo Spurt, Gusher, Funbrella and Bubble Trouble, among many others.