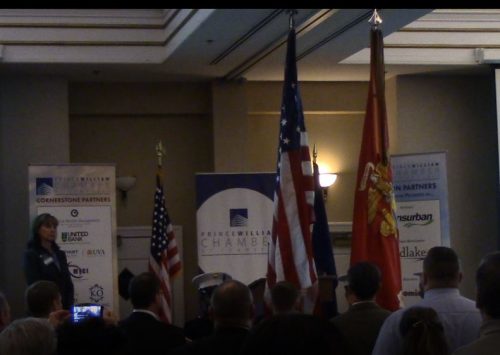 The Prince William Chamber of Commerce, organizations, and business owners honored the area’s service members and veterans at their Salute to the Armed Forces luncheon today.

The luncheon was hosted at The Clubs at Quantico at the Quantico Marine Corps Base.

During the luncheon there were several surprises, such as a ceremony to honor two Marines, Corporal Daniel Lawler and Corporal Richard Rosetti, for their service to Quantico, which was officiated by one of the day’s speakers – Colonel Joseph Murray, the Base Commander for Quantico.

Additionally, Murray played a video with footage of Quantico through the years, in honor of their 100-year anniversary celebration, which will be held later this year. More details on this event to follow.

The Commonwealth’s Deputy Secretary of Veterans & Defense Affairs Jaime Areizaga-Soto spoke about Virginia’s investments for the veterans population, and making sure that they receive services, care, and opportunities for entrepreneurship.

Areizaga-Soto also spoke about how Virginia now has a zero “functional” homelessness rate for veterans.

To close out the luncheon, attendees were treated with a speech from 94-year old World War II Navy veteran Chilton “Chilly” Raiford.

Raiford served in the Pacific Ocean theater during World War II, surviving two kamikaze attacks, and being gravely injured while serving on the USS Randolph.