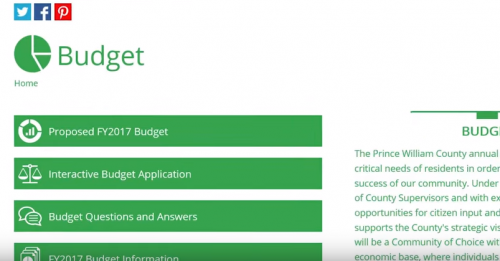 Do you know what’s in the Prince William County proposed budget for this year? You can found out more easily, thanks to a new ‘Interactive Budget Application’ app.

According to a Prince William County government release, the web app allows residents to take a closer look at government expenses, what the average tax bill is, and how tax rates and revenues go together to create the proposed budget.

Users can play with the app and adjust the different values in the budge, to see what would happen, according to a release.

“In using the application people can see what would happen to the average real estate tax bill as the tax rate is increased or decreased. Or, if they wish to keep the average residential tax bill at a specific level, they can enter that value and calculate what tax rate would be required,” stated a release.

Prince William County is currently undergoing its yearly budget cycle. During the cycle, county staff create a proposed budget which goes through many rounds of edits amongst the board of supervisors, with input from residents, before being approved in late spring.

One of the main goals of the app is to get residents more involved in the budget process, according to a release.

“We’ve developed this application so that citizens can better understand and participate in the budget process. It’s one thing to talk about how much revenue a penny on the tax rate generates, for example, or how much revenue is needed to fund specific programs. However, it’s much more useful to have those scenarios calculated so citizens can immediately see the impact and determine what direction they would recommend to the Board of County Supervisors when adopting a final budget,” stated Prince William County spokesman Jason Grant in a release.

The county feels that the app will make it easier for residents to understand county taxes and the budgeting process, which can be difficult information to process.

“There’s a desire for citizens to better understand what’s happening within the budget. A lot of times, just watching the processes and listening to the board meetings, you can get lost in the numbers. This allows people to look at them, and understand them in a little more detail so that they have a better understanding of what the board is considering,” stated Grant in a release.

The app is available online.