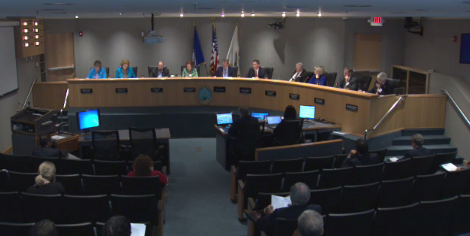 The Prince William Board of County Supervisors voted unanimously to grant the county’s school system with $1 million in class size reduction funding for a second year.

The funding is part of a five year agreement between the board of supervisors and the Prince William County School Board, where both entities will allocate $1 million each – for a total of $2 million – with the funds being used specific for class size reduction measures.

While the agreement began one year ago, concerns were raised about continuing the agreement, as according to Supervisor Pete Candland, there’s no written element to the agreement, and no accountability on how the money is spent for class size reduction by the school board.

“The million dollars – the vast majority of it – would continue to be used for class size reduction efforts that we did last year. The most significant portion is reducing class size in seventh grade for sixteen middle schools, which we cooperatively did last year. We would continue that in the current year, and in fact we’ve hired those teachers,” stated the Prince William Associate Superintendent for Finance & Support Services David Cline.

According to Cline, once the five year agreement is completed, the school board intends to continue the funding, and would pick up the $2 million solely from their budget, without the $1 million contribution from the board of supervisors.

During discussion on the agreement, Candland voiced his concern about the revenue sharing agreement – currently at 57.23% – which is the current funding mechanism for county schools.

“We’re here, in my opinion, because of a bad agreement that we have, to fund our schools through the revenue sharing agreement…we’ve gotten ourselves into this situation because we have a bad model to fund our schools. I believe that it’s one that doesn’t provide any sort of accountability – or very little accountability. And I think that this attitude that we fostered through this [revenue sharing agreement] has developed this attitude from the school board, that there’s no accountability from them to this board – the taxing authority – whatsoever,” said Candland.

Earlier in the year, during the county’s budget process, the idea of removing the revenue sharing agreement and funding the school system differently was discussed. Supervisor Maureen Caddigan voiced concerns about that idea.

“If we took the revenue sharing money away from the schools, and said ‘No, we’re going to allocate funds’, they may get far less,” said Caddigan.