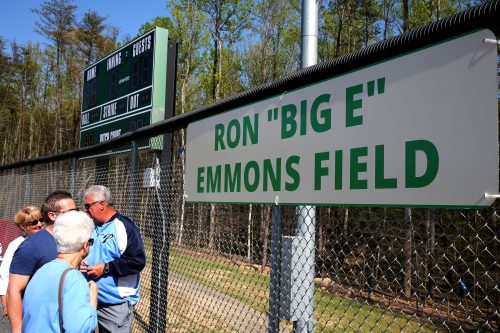 A community advocate was honored during a naming ceremony for a baseball field located at Fuller Heights Park in Dumfries.

Hosted by the Prince William Department of Parks and Recreation, the ceremony named the field Ron “Big E” Emmons field after Ron Emmons, a New York Yankees fan that came to Prince William after retiring from the Navy in 1973, according to a release.

More on Emmons and his community outreach, from a release:

In 1957, Emmons’ naval career took him to Quantico Marine Corps Base where he met his future wife, Jeannie Keys, a Dumfries native. After Emmons’ last tour, he and Jeannie retired in Triangle and opened the Triangle Dental Laboratory.

During his years in Prince William County, Emmons devoted himself to sports in the area as he mentored young ball players, volunteered with Potomac High School’s first baseball coach, Jerry Gardziel, and actively scouted for the Yankees. Emmons also helped develop the “Fall Classic,” an annual baseball tournament to showcase high school ball players so college coaches and professional scouts could get a look at the local talent. Over the 25 years of the Fall Classic, 85 local players were drafted in the major leagues.

Mike Covington, who played for Emmons on a Little League team in the 1970s, said Emmons was active in the community until the day he died in early 2016.

Covington, now a physical education teacher and baseball coach at Potomac High School, said Emmons was a “boisterous” man with a heart of gold, who made sure those ball players who needed rides to games and practice could count on him to get them to where they needed to be. Covington talks about riding in the back of Emmons’ pick-up truck – back in the day when kids were still allowed to do that. “He’d ride around with 10 or 12 kids in the back there, bringing them to either Little League practice, or football practice, or whatever we had going on. He was always involved. If he could help, he would help.

He was very kind and caring and very much for the kids. He’s just do whatever he could for kids.”

Alex Burke, a senior who plays right field on the Potomac High School baseball team, knew Emmons and called him “Big E” like everyone else. Burke said Emmons was always good for advice, especially when a ball player was having a bad day. “He was like a grandfather,” Burke said. “The one thing that I’ll probably remember the most was that he said. ‘No matter what, whatever obstacles you may face, you’ve just got to think positive and overcome them.'”

Prince William Supervisor Maureen S. Caddigan said it was fitting that a ball field be named after Emmons. “He was ‘Mr. Baseball.’ He got a lot of scholarships for kids that might not have even gone to college. He was dedicated. He was thrilled about this park coming about. He cared about Triangle and he cared about the kids. We loved him, and his legacy will live on through baseball.”