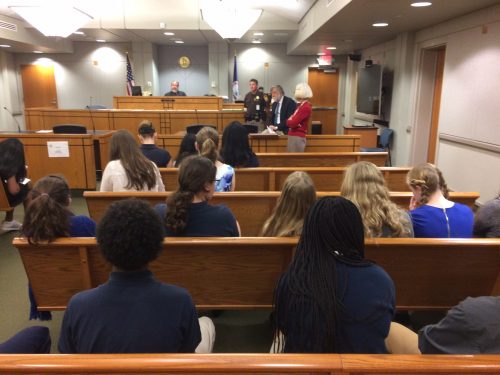 The Prince William County Bar Association is helping students learn about civics and promoting careers in law and law enforcement.

According to a release, the association is providing free tours of the Prince William County Judicial Center for middle school students.

“The tours are organized and implemented by volunteer attorneys and judges from the PWC Bar, along with the assistance of bailiffs, court certified language interpreters and courtroom clerks.  11 area middle schools are participating in this year’s program, which runs from February 27 through March 29, 2017,” stated a release.

During the tour, the students get to experience all three levels of court – Circuit, General District, and Juvenile and Domestic Relations – and then end with a “mock trial” experience.

More on the program, from a release:

Turkessa Rollins, Esq., the administrator of the program, commented that, “The students seem to enjoy being in a real courtroom; seeing real judges handle cases.  This gives them the opportunity to see the judicial branch of government in action, versus just reading about it at school, and they have questions about everything they see.”  During a recent tour, students in Judge Farris’ courtroom asked how the court reporting device worked.  In Judge Jarvis’ courtroom they asked about his “dress”, referring to his robe, to which he replied, “I get hot wearing it most of the time, but it’s an important symbol of the authority of the court.”  He also told them about the role of the Sheriff’s Deputy, (courtroom safety), the courtroom Clerk, (docket control), and added, “They help me move through my docket so I can hear from as many people as possible, in an orderly fashion, to resolve whatever issues they are bringing to court today.”  Most of the cases in Judge Jarvis’ court on this day were animal cruelty cases.

For the Mock Trial, the students gathered in a Juvenile and Domestic Relations District Courtroom and, with the aid of a script, role played the events that lead to three juveniles being on trial for sexting.  The first juvenile was charged for producing and distributing child pornography because she snapped a selfie on her phone and sent it to her boyfriend.  The second juvenile was charged with distributing child pornography because he was the boyfriend who received the selfie, told a friend about it and obliged when the friend asked for a copy.  The third juvenile was charged with soliciting child pornography because he asked for a copy of the selfie.  While the subject matter caused giggles at the beginning, the student audience followed along, and ultimately voted for guilty verdicts for all three defendants.

Jackie Lucas, Esq., explained that she has seen cases like this often and the penalty is usually a suspended sentence conditioned on a year probation which includes, to the horror of the students, one year with no social media, and possible expulsion from school.  It was an eye opening experience for them.  Following the Mock Trial, the students were polled to see who might be interested in pursuing law as a profession, and a few hands went up.  One student asked, “How long does it take to become a lawyer?”  A minimum of seven years was the reply.

For more about this and other community service programs sponsored by the PWC Bar Association, visit them on line at www.pwcba.org.