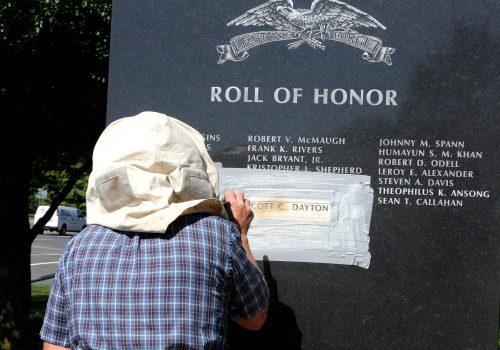 The memorial, located at Freedom Park at the Prince William County Government Complex in Woodbridge, is a black granite monument that lists the names of all county residents who have lost their lives serving in war.

Dayton, a Woodbridge resident, was killed in November 2016 in Syria – 35 miles north of Raqqa – when an improvised explosive device (IED) exploded.

“Dayton was assigned to the Explosive Ordinance Disposal Unit 2 in Virginia Beach, according to the Air Force Times”, stated a release.

Dayton, a 23-year veteran of the U.S. Navy, deployed multiple times in support of Operation Iraqi Freedom and Operation Enduring Freedom, and received multiple military awards that included two Bronze Stars and the Purple Heart Medal. He left behind his wife and two children.

Dayton and others that have served in the U.S. military will be honored tomorrow at an Armed Forces Day Ceremony at Freedom Park at 1 p.m.

“This event provides an opportunity for the community to join together and reflect on the sacrifice of Prince William County residents who died in war defending our freedoms. It also is a time for the community to honor all the men and women who have ever served in our nation’s military,” stated a release.