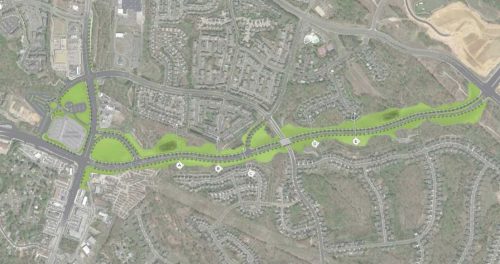 Projects surrounding a new development raised concerns among officials from the Town of Dumfries this week.

The Dumfries Town Council heard details about the Potomac Shores Parkway and proposed improvements for two primary roads at a meeting on Wednesday.

Most of the parkway project is outside of the Town of Dumfries, according to Andrew Wagner from SunCal.

SunCal is a California-based real estate development company that is developing the Potomac Shores area.

Councilwoman Monaé Nickerson mentioned that the project would still impact many community members.

“Even though 90 percent of this is outside of town limits, it affects 100 percent of our residents, because this is our way in and out of the rest of our lives,” Nickerson said.

Wagner also presented recommended updates that could be made to Route 1 and Route 234.

The improvements include widening Route 1, and adding a service road that would run parallel to Route 234 and “terminate” Old Stage Coach Road.

Additionally, all left turns would be eliminated at the intersection of Route 1 and Route 234, creating “a very smooth flow of traffic,” according to Wagner.

“This is more convenient for the people that live down in the area that you’re developing, but it’s certainly isn’t a dadgum thing convenient for anybody in the Town of Dumfries,” Brewer said.

“When all of this was put into play, it doesn’t seem to me — from where I sit — that any consideration was given to the Town of Dumfries,” Nickerson said.

While drivers who use the road may feel “inconvenienced,” Wagner explained, the cost of connecting it the parkway “doesn’t justify the expense.”

“This construction project is $36 million,” Wagner said. “We’re not in a position to add cost to this project. I can’t agree to that.”

SunCal is giving a proffer of $250,000 that the county can use for any future studies that are needed on the corridor.

“It’s possible — from what I understand — that there may be some ways to use those funds for [the] Town of Dumfries,” Wagner said. “I can’t guarantee that, I don’t know that.”

Here is a summary:

This is the full video: