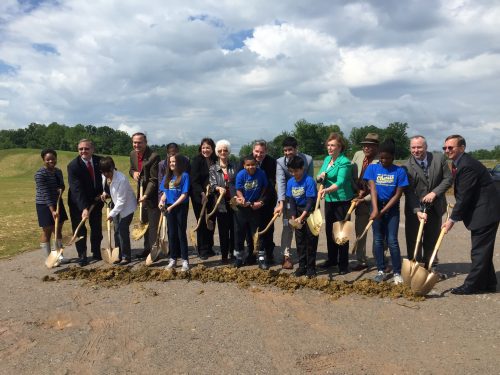 Students, school administrators, and elected officials gathered in Dumfries today for the groundbreaking ceremony for the Potomac Shores Elementary School.

The school, which will be located at 2500 River Heritage Boulevard, is located next to the Potomac Shores housing community.

According to county documents, the school will be 101,288 square feet and will be able to hold more than 850 students. According to Superintendent Dr. Steven Walts, a permanent name for the school has not yet been selected.

Ronald Whitten, the principal-to-be for the school, served as the emcee for the ceremony.

Walts spoke about the many school openings he has been to during his tenure, and how the county’s school system is continuing to grow.

“We’re one of the biggest school divisions in the country. We have now moved from 38th largest in America to 36th…we are opening new schools all the time,” said Walts. Walts also said that next year the Prince William school system is projected to grow by 1,000 students.

The school will have STEAM (science, technology, engineering, arts, and mathematics) programs, and lots of technological gadgets for students.

“We’re opening a school every single year, and the growth is remarkable…this school is going to be a state-of-the-art technology school,” said Potomac School Board Member Justin Wilk.

The elementary school is slated to open sometime late next year. According to Supervisor Maureen Caddigan, a middle school is also expected to be built in the area in the coming years.