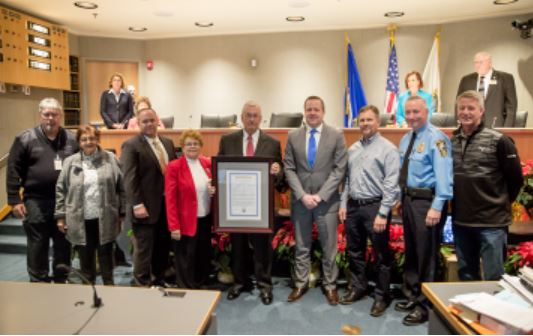 The Prince William Board of County Supervisors (BOCS) voted to approve the name at their meeting yesterday.

Deane was the longest serving member from the original Prince William County Police Department, and retired back in 2012.

The project has already gone through its fair share of challenges, catching fire, resulting in $50,000 in damage earlier this year.

More on Deane, from a release:

Deane, who retired after a 42-year career with the department, was the police chief for more than 24 years. He was one of the original 42 police officers hired when the county established the Police Department in 1970. He was promoted to lieutenant in 1981, deputy chief in 1985 and to chief in 1988.

According to the Board’s resolution, Deane promoted innovation in the department by embracing the use of technology in policing. He also created trust between the department and the community by implementing community-based policing techniques that included using a public commenting system, establishing the senior and citizen academies and neighborhood watch programs, and placing field offices at strategic locations.

Under Deane’s leadership, the department achieved a forensic accreditation award, the first awarded to a local law enforcement agency in Virginia. The department was also the first agency in the state to be named a “National Center for Missing and Exploited Children 911 Call Center Partner.”

Deane’s awards and recognitions include recognition from the International Association of Chiefs of Police for his efforts to protect and promote human rights, George Mason University’s Wayne F. Anderson Alumni Award for Distinguished Public Service, CALEA’s Egon Bittner Award for significant contributions to the public safety profession, the Virginia Association of Police’s President’s Award for his many years of service to law enforcement and leadership to the association, a Human Rights Award from the Prince William County Human Rights Commission, and the Virginia Hispanic Chamber of Commerce’s Leadership Council Award for Excellence in Public Safety.

The decision to name the station after Deane was done to “honor and recognition of Chief Deane’s unparalleled dedication to public safety, unwavering commitment to excellence and everlasting legacy of leadership, compassion, integrity and professionalism,” stated a release.