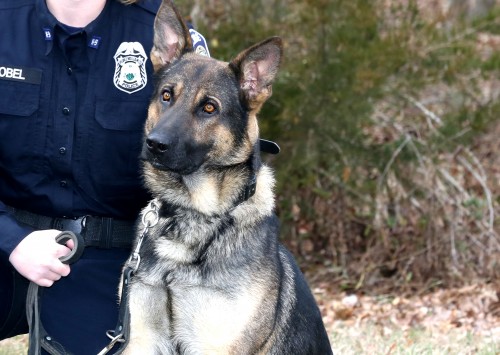 Prince William County Police Department just got some new members, which happen to be German Shepherds.

In the graduating class was Officer Katybeth Strobel – the first woman in the county to ever become a K-9 officer with her canine partner Abrams, according to a release.

“I’ve always wanted to be a K-9 handler. It was always my career aspiration. So, it’s finally great to be able to achieve that,” stated Strobel in a release.

Strobel has been with the Prince William police department for 10 years, according to a release.

Another graduate of the class, Officer Shaun Barrett, said that the program was hard, but well worth it.

“It’s a touted job assignment. It’s something I’ve always wanted to do. It’s one of the hardest things I’ve done and most rewarding at the same time. All the hard work has paid off,” stated Barrett in a release.

And while the officers and dogs go through intense training together, the canine partners have even more training before they’re ready to patrol for the department.

More on the dogs’ training, from a release:

Prince William Master Police Officer and K-9 Officer and team trainer William F. VanAntwerp, Jr., said the department looks for dogs with a steady disposition and experienced police officers to pair with the dogs to form a K-9 team. “We’re looking for a very stable dog. Contrary to popular belief, we’re not looking for the real aggressive dogs. We want the dogs that are very even-keeled, but highly motivated. We’re looking for people that can think on their feet. We want them to be proficient patrol officers. We’re just teaching them how to use a different tool.”

VanAntwerp told a room full of colleagues, friends and families of the graduates that the dogs begin their training when they are between 12 and 14 months old. The dogs must learn how to find and apprehend bad guys, learn to sniff out illegal substances, search buildings, pass obedience requirements and prove their agility. As young dogs, the K-9 candidates had no training or experience in any of those areas, VanAntwerp said. “We had to teach them everything, and they accomplished everything we threw at them.”

For the officers that complete the K-9 school, it’s a long commitment. According to a release, the canines typically have an eight to nine year career in the unit, and then live with their handlers long term.

In addition to Strobel and Barrett, two other officers – Officer Vann Sayasithsena and Officer Bryan Morrison – graduated with their canine partners as well, according to a release. Both officers work in other police departments in the Northern Virginia area.