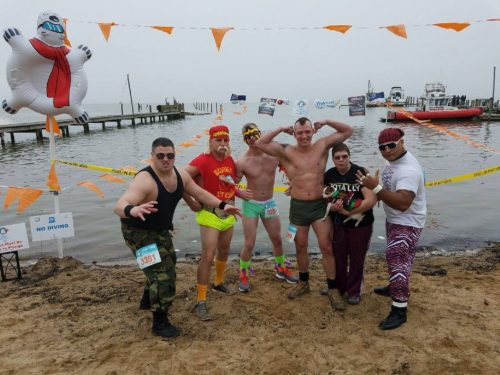 The Potomac River’s frigid temperature didn’t stop a couple hundred community members from diving into its waters this weekend.

About 250 people participated in The Northern Virginia Polar Plunge Festival on Saturday.

The event, held at Tim’s Rivershore Restaurant & Crabhouse in Dumfries, raised more than $90,000 for the Special Olympics.

More than 21,000 athletes living in the Commonwealth compete in the Special Olympics.

“No longer is it enough to provide a place for people of all abilities to come together through sport. It is time to demand uncompromising inclusion— in school, employment, healthcare and social activities like the Polar Plunge Fest,” Special Olympics Virginia President Rick Jeffrey said.  “For our inclusion revolution to succeed, we need more rebels, heroes and fighters just like the participants who helped us raise $90,000 this weekend.”

It is one of four festivals offered in Virginia.

The Virginia Beach plunge, which was held earlier this month, raised almost $1.2 million. A festival took place in New River Valley on Friday, and another plunge is scheduled for June 9 in Richmond.