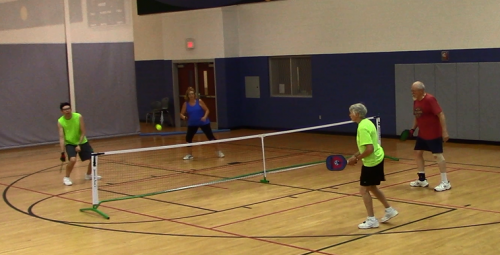 Pickleball: a fast growing sport in Prince William and beyond

When you hear the word ‘pickleball’ it may not strike you as the name of one of the fastest growing sports, but with more than 2 million people around the world playing it, that is the case.

According to Benjamin Sarles, a pickleball player at the Manassas Park Community Center, the sport has taken off in recent years.

“Pickleball is a very fast growing sport. It started in the 60s, but it’s since grown so much that they [just] had their first televised finals this past weekend with the U.S. Open Pickleball Championship,” said Sarles.

Sarles plays with his teammates at the community center on weekday mornings. According to Sarles, pickleball leagues are also hosted at the Freedom Center in Manassas, and Kids Sports in Woodbridge.

There are almost 13,000 indoor and outdoor pickleball courts now in the United States, according to the USA Pickleball Association.

According to Sarles, the game is a cross between ping pong, badminton, and tennis.

One of the benefits of playing pickleball, aside from being a great workout, is that it’s friendly for all ages and skill levels.

“I enjoy it because with the way the rules are set up, anybody that’s 99 years old can play anybody that’s 18 years old, and feel just as competitive…it is a lot of good exercise,” said Sarles.