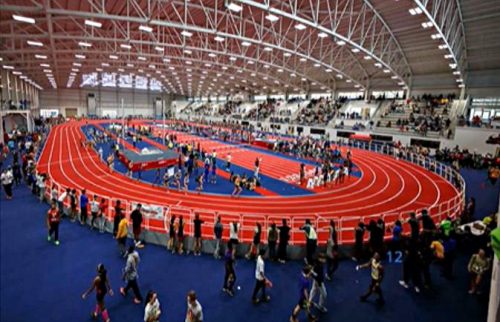 More athletic facilities could be heading to the region.

Officials received a sneak peak at several parks and recreation projects that could be included in a proposed $200 million bond.

Department of Parks, Recreation and Tourism Director Seth Hendler-Voss presented them at a Board of County Supervisors (BOCS) meeting, which was held at the McCoart Administration Building in Woodbridge on Tuesday.

Some of the projects were brought up by BOCS Chairman Corey Stewart at the Re-dedication of John D. Jenkins Park in Dale City on Saturday.

A proposed 230,000-square-foot Indoor Sports Complex that could be constructed in Occoquan is the largest one being considered.

Featuring a 200-meter hydraulic track and courts, the building is expected to cost $84 million.

Hendler-Voss also provided details about an Aquatic and Fitness Center.

Competitions and leisure pools, a fitness room and classrooms are a few features of the proposed space.

“Not only will this serve for a destination for recreation and health and education, it’ll serve as a gathering place for [the] community to build relationships, have dialogue,” Hendler-Voss said.

If approved, the estimated 50,000 square-foot facility would cost about $42 million.

Prince William County staff are also looking into a 125,000 square-foot Community Field House that would be located in Brentsville.

The $21.6 million building would serve as an indoor practice area that could be used by local leagues, high schools and community members.

Many county residents voiced their approval of the recreational facilities.

Benita Fitzgerald Mosley, who attended Gar-Field High School in Dale City and became a gold medalist in the 1984 Olympics, discussed the need for athletes to have facilities for training and competing.

“There are … communities all over the country that are building facilities like the [two] that you’re contemplating building for the very purpose of not only community development but youth development and — for the long term — economic development,” Mosley said.

Other proposed projects include updates to Howison Park in Manassas and Long Park in Gainesville, and an expansion of Fuller Heights Park in Triangle.

Community members interested in providing feedback may attend a meeting BOCS Chairman Corey Stewart’s office is running at 7 p.m. on May 21 at the Hylton Performing Arts Center in Manassas.