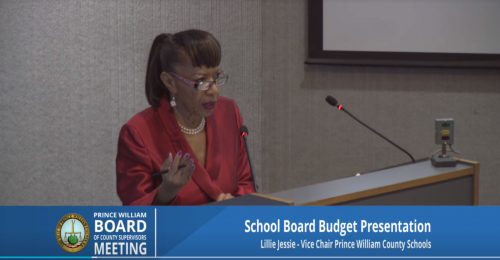 It’s a challenge the county school system is facing as it looks to future.

During the next five years, Prince William County Public Schools’ (PWCS) estimated 91,000 student population is expected to grow by 6,200 pupils.

As an added challenge, school and county officials are struggling to find property that can be used for seven facilities.

“We’ve got a problem,” School Board Vice Chairman Lillie Jessie said at the Board of County Supervisors (BOCS) meeting on Tuesday. “We’ve got to find sites and/or we’re going to have to look at how we use land, and how we construct.”

County supervisors weighed in on the overcrowding issue, which was discussed after Jessie presented the School Board’s $1.5 billion budget.

The board approved the spending plan on March 22.

The budget includes a 2.7 percent pay increase for “eligible employees.”

If approved by the BOCS on April 24, the budget would also support PWCS’ new Independence Nontraditional School, land for a 14th high school, and 1,100 additional students.

To address its overpopulation issue, PWCS has placed more than 200 trailers at schools throughout Prince William County.

During her presentation, Jessie brought up safety concerns to the BOCS.

“This school system is very serious about securing buildings, but I’m not sure about what we’re going to do with the fact that we have 207 trailers,” she said.

The number of portable classrooms, Jessie added, could increase if sites for future schools aren’t located.

Supervisor Pete Candland mentioned that the county may have some land it could give to PWCS, which could help the school division save money.

However, he added, it’s also important to find the “right site” for each school.

“I’ll speak for myself in the Gainesville district, just because it’s an open piece of land doesn’t necessarily mean that it’s the right site, and I think we’re still trying to figure out what are those right sites, how much is it going to cost,” Candland said.

He also agreed that the school system’s overcrowding issue should be addressed.

Candland proposed a 10-year construction plan that would cost about $170 million.

“I think it’s time that we take the bold step to fund this supplemental plan that will virtually eliminate trailers across Prince William County and help reduce class sizes for our students,” he said.

If the proposal is approved, taxpayers would help fund the plan, which would kick off in fiscal 2020.