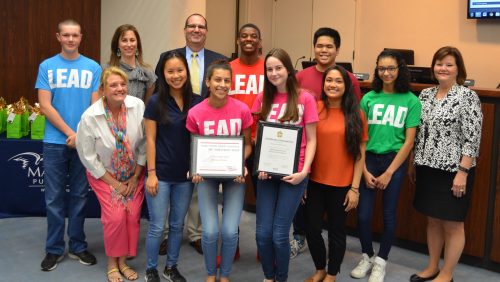 The student council at Osbourn High School was recognized for their exemplary leadership.

Osbourn’s student council is the recipient of the 2016 National Gold Council of Excellent Award by the National Association of Student Councils (NASC), for their “exemplary records of leadership and community service activities that serve to improve the school and community,” according to a release.

In addition to the NASC award, the Osbourn student council also received the Virginia Student Councils Association (VSCA) 90th Achievement Award in Williamsburg, according to a release.

The VSCA gives this award to schools that “promote leadership and community service through their school’s student council activities,” stated a release. According to a release, Osbourn has won this award for the past three years.

“These students need to be celebrated. Both of these awards require the students to do a tremendous amount of programming,” stated Osbourn High School teacher and Student Council Advisor Robin Albrecht in a release.

More on NASC Gold Awards, from a release:

NASC’s Gold Level is designated to student councils that meet all required standards as well as a minimum number of additional standards, such as leadership training for council members, teacher/staff appreciation activities, student recognition programs, school community service projects, spirit activities, goal setting, financial planning, and active participation in state and national student council associations. Student councils must enter projects into the National Student Project Database for review and receive a letter of recommendation from their principal in order to be considered for the award.