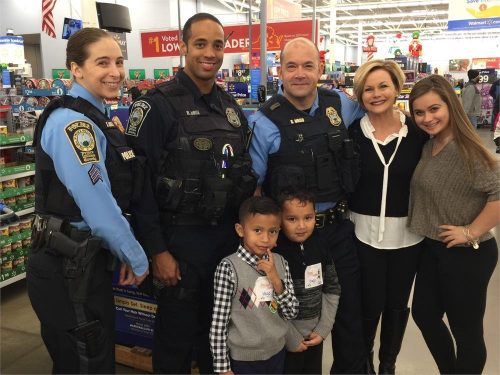 According to a release, the Fraternal Order of Police, Volunteer Prince William, SPARK, the Education Foundation for Prince William County Schools (PWCS) and other business partners have come together to help the students in various ways.

“Volunteers from these special organizations give their time and their hearts to serve over 4,000 Prince William County students during the holiday season,” stated a release.

Volunteer Prince William handled the coordination of the UnTrim-A-Tree gift program, finding donors of gifts for the students, and providing those gifts thousands of students in the Prince William County area.

And police officer spent time with 100 students as part of the Santa Cop program, organized by the Fraternal Order of Police Battlefield Lodge #43.

“Students were greeted by an officer and taken to Walmart for a shopping spree, going through the toy aisles with their eyes lit up ready to place items in the cart. Volunteers, to include students from Osbourn Park High School and School Division employees, assisted in wrapping all of the gifts while students enjoyed a hot breakfast with officers hosted by the Ornery in Woodbridge and the Park West Lions Club in Manassas,” stated a release.

But there is more need.

According to a release, Volunteer Prince William announced that 500 children still need assistance through the UnTrim-A-Tree program. Contact Mary Foley at 703-369-5292 if you want to participate.