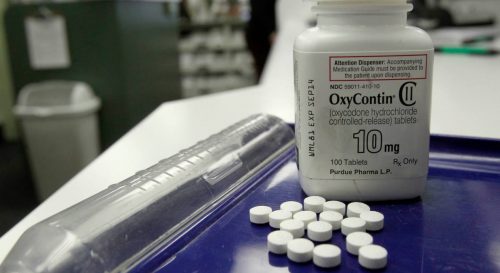 Opioid use, overdose a growing problem in Prince William

During a recent Board of County Supervisors meeting, staff updated the board on the opioid epidemic crisis in Prince William.

“Opioid addiction is a growing national epidemic. More people are dying from opioid drug overdoses than ever before, and the Commonwealth of Virginia and Prince William County aren’t immune to the problem,” stated a release.

More on the issue, from a release:

“The opioid epidemic is a crisis,” noted Prince William Police Chief Barry Barnard. “We need to talk about it, and we need to address it. We need to educate the community and find solutions to help those who are addicted to opioids.”

Opioids are pain killers that fall into two categories: prescription pain killers (like morphine and oxycodone) and illicit drugs like heroin. Once opioids enter the blood stream, they adhere to the brain receptors to produce a sense of euphoria. This sensation is very addictive and creates a physiological dependency that is very difficult for people to overcome.

This growing epidemic affects all races, ages and socio-economic classes. The most common age of those to whom Prince William County responds is adults and children ages 16-30 (39% of responses). The second largest age group are individuals age 31-45 (31%). Of all overdoses treated by Fire and Rescue, nearly 66% are white, 25% black, 5.6% Hispanic, and 3% other race/ethnicity.

“Overdose is just one element of the health risks of opioid addiction,” said Dr. Alison Ansher, Public Health Director. “The sharing of unclean needles with certain opiates, such as heroin, is a major contributor to the spread of blood-borne diseases such as Hepatitis B, Hepatitis C and HIV.”

To begin addressing the issue, Prince William County has a number of agencies, including Police, Fire and Rescue, Social Services, Community Services, Criminal Justice Services, Commonwealth Attorney’s, the Adult and Juvenile Detention centers, and the Virginia Department of Health-Prince William Health District, working together to battle the opioid epidemic by running education and awareness programs, as well as harm reduction programs.

There is also a need for treatment for those suffering from opioid addiction. The Community Services Board offers a Rapid Entry Program that provides assistance to people within two to three days of their first contact with first responders. The program aims to help people who are using opioids receive treatment as quickly as possible.

Finally, there is a need for better regulations on opioid prescriptions. The Virginia General Assembly has legislation pending this year that would aid local jurisdictions in fighting the epidemic. One new law would prohibit doctors from prescribing more than a seven-day supply of opioids with exceptions for cancer and chronic pain. Other legislation would require electronic prescriptions for opioids to reduce prescription fraud.

“People are dying, both adults and children, as a result of this epidemic,” said Woodbridge District Supervisor Frank Principi. “We need to make sure we do things differently if we are going to address this issue.”