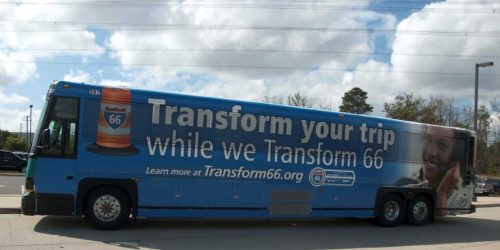 Haymarket residents are gaining another commuting option in the coming weeks.

Starting on December 17, OmniRide will offer a new route to the Rosslyn/Ballston corridor.

OmniRide is a commuter bus service run by the Potomac and Rappahannock Transportation Commission (PRTC).

The service will help commuters avoid paying I-66 tolls, according to a release.

“This new Express bus route will be a game-changer for residents who don’t want to deal with traffic or tolls on I-66,” Supervisor Ruth Anderson, who serves as PRTC’s Chair, said in a release. “Instead of stressing out about their commute or paying tolls to arrive at work on time, riders can relax in a comfortable seat and read or get a few extra minutes of sleep, knowing they’ll have a reliable trip.”

OmniRide will provide four trips on weekday mornings and four trips during the afternoons and evenings.

Stops are going to be available on Clarendon Boulevard, North Fairfax Drive, and Wilson Boulevard.

It will also serve four stops on Heathcote Boulevard, one of which is located at a new park and ride that’s under construction.

“OmniRide has wanted to offer additional bus services in western Prince William for years, but a lack of commuter parking in the area has been a major obstacle,” Supervisor Jeanine Lawson, who’s on the PRTC board, said in a release. “The construction of this new lot and others that VDOT will open in future years will enable OmniRide to offer some greatly-needed commuting options in the I-66 corridor.”

Through February 15, route users can ride for free.

Afterward, it will cost $3.45, which is half of the normal rate.

The agencies are offering the promotion to encourage commuters to use the bus service while officials are building the Express Lanes.

Here are the scheduled departure times for the Haymarket route: