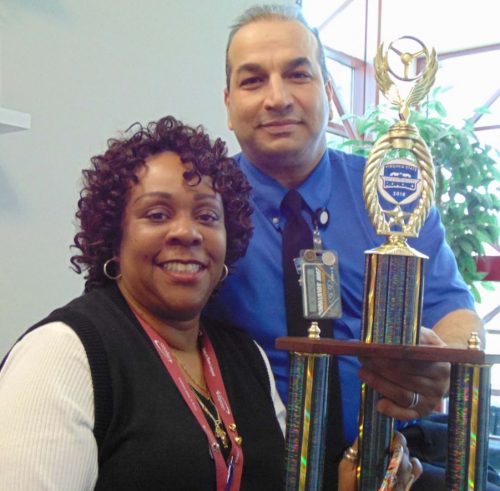 An OmniRide bus operator is heading to an international competition after placing first at the 2018 Virginia State Bus Roadeo.

At the state competition, held in Lynchburg, Mohamed Elatrebi maneuvered a bus through a timed obstacle course, according to a release.

He also backed the vehicle up into 90-degree turns and pulled it up so that it was within 6 inches of a curb.

Judges graded participants on their uniform, a pre-trip bus inspection and a written test.

Elatrebi, who competed against 13 other bus operators, won first place in the 40-foot category.

“I’ve been trying to do this since the first time I went to the state roadeo,” Elatrebi said in a release. “Now I want to keep it going and win first place until I retire.”

Elatrebi, who has been an OmniRide bus operator since December 2006, has participated in the Virginia State Bus Roadeo four times.

He will compete in the International Bus Roadeo, which is slated for May in Tampa, Florida.

“I have seen Mohamed set the bar for himself over the past years to place at the state level, and he did it this year!” Monique Wyche, First Transit’s Operations Supervisor and president of the Virginia State Roadeo Committee, said in a release. “As a member of the state committee it’s always a good feeling to have one of your own win. I look forward to Mohamed traveling to Tampa to compete at the International Roadeo, and hopefully we can have a repeat victory!”