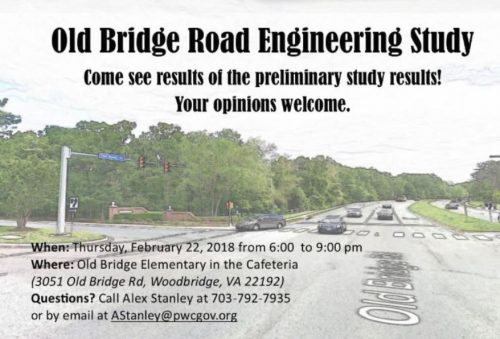 Many drivers aren’t surprised when they experience congestion on Old Bridge Road.

For years, it has been a heavy traffic area.

An engineering study being conducted by Parsons Corporation seeks to address the issue.

The study seeks to solve congestion between Prince William Parkway and Route 123, according to a release.

A final report will be submitted later this year.

Community members have a chance to hear the preliminary results and provide feedback at a Public Information Meeting on February 22.

The meeting, which will be held Old Bridge Elementary School in Lake Ridge, will run from 6 p.m. to 9 p.m.

“After many months of [Old Bridge Road] Think Tank Meetings and an OBR engineering study we are ready to show some potential congestion solutions to the public,” Occoquan District Supervisor Ruth Anderson wrote in an email. “This meeting is another step in the process toward our ultimate goal of congestion mitigation on OBR.”

Those interested in attending the meeting can register online.

Community members can offer feedback in an online survey.

Two other projects could impact the Old Bridge Road traffic.

Another southbound lane could be added on I-95 between Route 123 and the Prince William Parkway. If the Virginia Department of Transportation (VDOT) project is approved, evening commuters may travel to the parkway instead of driving on Old Bridge Road.

An I-95 Ramp Metering Project is another idea that is being considered. Drivers, if the metering project was approved and funded, would enter and exit the Route 123 ramps using a timed system.