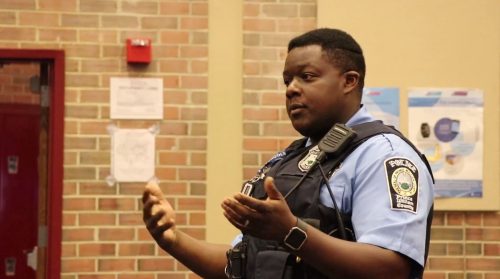 Earlier this month, community members learned about some steps that are being taken.

“I want to re-emphasize that keeping our students safe is our number one priority, and it is going to take the help of our entire community to make sure that happens,” Jenkins said.

Sergeant Sarah Rolle talked about a active violence training that is run by the police department.

“We want to get as many people trained as possible in order to get that information and that education out there,” Rolle said.

School Resource Officers (SRO) are stationed at middle and high schools throughout the county, according to Barnard.

Officer A.J. Wrighten, who has been an SRO for six years, spoke about his day-to-day responsibilities, which include investigating crimes and working with students.

“You begin to develop these relationships with students where you’re a trusted adult in that building for that student,” Wrighten said.

Personnel from the police department pay thousands of visits to the elementary schools each year, as well.

“A threat is a threat, until it’s not. That’s our attitude, that’s how we address it,” he said. “Meaning, it doesn’t matter how small or insignificant the threat may be. We address all threats.”