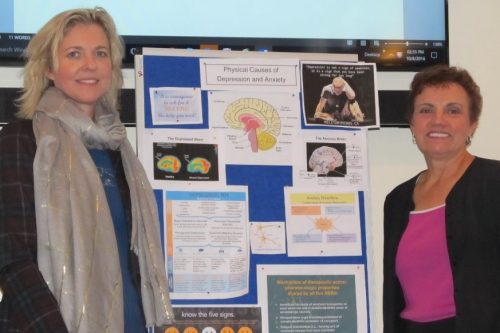 According to a release, the event was hosted by Life Member Karen Jefferies, Commander USN, Ret, and Post Auxiliary Member Kerry Gray, and a registered nurse who teaches at Georgetown University.

“Veterans, friends, and neighbors from the community came to participate.  A key component of the campaign is to make communities aware of the five signs of emotional suffering: personality change, agitation, withdrawal, poor self-care and hopelessness,” stated a release.

On this day, Veterans of Foreign War Posts nationwide sponsored a “Give an Hour” campaign for “A Day to Change Direction.”  National VFW Commander Brian Duffy has stated, “All of our members at one point were at the pointy end of the spear,” Duffy said. “All of them know first-hand what it means – no matter what generation, no matter what we called it back then, whether it was shell shock or PTS, PTSD, they all know the challenges.

Nearly one in every five people, or 42.5 million American adults, has a diagnosable mental health condition. Half of all lifetime cases of mental disorders begin by age 14. Often our friends, neighbors, co-workers, and even family members are suffering emotionally and don’t recognize the symptoms or won’t ask for help.