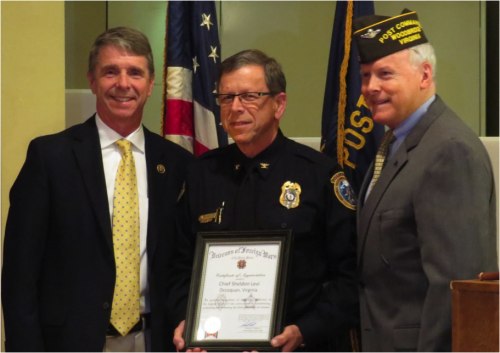 During the event, Wittman spoke with attendees about the importance of United States veterans, and their service to the country, according to a release.

“Congressman Wittman informed the audience on current legislation affecting Veterans’ Affairs and an exceptionally detailed outlook, by Service, on the National Defense Authorization Act, along with the issues that the House Armed Services Committee faces,” stated a release.

The VFW Post also recognized Levi for his many years of public service.

“Chief Levi first joined the Town of Occoquan as an Auxiliary officer in 2007, and was appointed Chief in 2010. In June 2013, Levi, in addition to his police responsibilities, was appointed as Acting Town Manager. Post 7916 Commander Chuck Wilson presented the Veterans of Foreign Wars Certificate of Appreciation to Chief Levi in grateful recognition of his unyielding adherence to the highest ideals of law enforcement by maintaining, preserving and protecting the rights of all citizens,” stated a release.

Levi will be retiring as chief on December 1. There will be a retirement reception for Levi on November 29 from 4:30 p.m. to 6:30 p.m. at the Occoquan Town Hall that is open to the public, according to a release.

Here is a video of the retirement reception held at town hall: