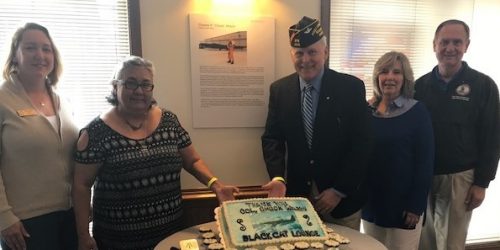 During the ceremony, the front room of the post was named “Colonel Wilson’s Black Cat Lounge”, named to honor the Post’s outgoing Commander – retired United States Air Force Colonel Chuck Wilson, who served as the Commander for three years.

More on Wilson and the naming of the lounge, from a release:

During his Air Force Career, Chuck Wilson was blessed with multiple commands at several levels, on both sides of the globe.  In 1995 & 1996, Wilson was the Commander of the renowned high flying U-2 Squadron located at Osan AB, South Korea.  That squadron, is the 5th Reconnaissance Squadron, known as the “Black Cats”.

The Black Cat Squadron has a rich heritage going back to 1960 when the Black Cats flew the   U-2 “Dragon Lady” out of Taiwan, to U-Tapao, Thailand during the Vietnam conflict, through today out of Osan AB, South Korea.  And yes, this outstanding squadron has a “Black Cat Lounge”.

Wilson is slated to go on and become the Commander of the Veterans of Foreign Wars, Virginia District 10, which represents almost 6,000 veterans, 1,500 Auxiliary members, from Fairfax, Loudoun, Arlington, and Prince William Counties.

This acronym, with the meaning known only to the Black Cats, “IYAABCYAS,” lets them know that there is a Black Cat present.  Be sure to visit Post 7916’s Black Cat Lounge during Occoquan’s Arts and Craft Show 3 and 4 June.