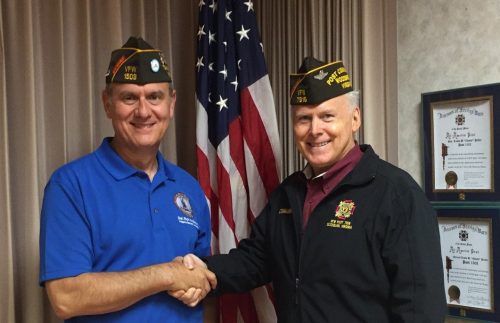 PRVC was formed back in 1972, as a way “to coordinate and promote the common good of veterans of the Northern Virginia area and to honor our fallen comrades on Veterans’ Day and Memorial Day,” stated a release.

More on Wilson’s background, from a release:

Wilson, also the Commander and executive Director of VFW Post 7916 in Occoquan, is a Aerospace Business Consultant with the Goyak Group, and a business executive who has been with L-3 Communications, and the Raytheon Company.  Wilson completed a distinguished Air Force career that includes three Command tours (chief executive) at multiple Command levels, served in key positions within the Office of the Secretary of Defense, The Joint Staff, and the US Department of State. Additionally, he was a U-2 pilot, U-2 instructor pilot, Director of U-2 operations, and Commander that piloted highly sensitive missions worldwide.

The organization currently represents more than 15,000 veterans from 29 different veterans organizations, according to a release.

One project that PRVC takes part in is the “Avenue of Honor” at Quantico National Cemetery, stated a release.

The Council proudly sponsors the “Avenue of Honor” at Quantico National Cemetery. The Avenue of Honor is erected every Memorial Day and Veterans Day and is made up entirely of flags donated by families of deceased veterans. The flag poles used are not provided by the Veterans Administration. The flags are displayed on flagpoles donated entirely by families, organizations, towns and private individuals. The original design for the “Avenue of Honor” included only 80 flag poles. Today over 200 flags are flown.  The project continues to expand from the main gate to every corner of the cemetery.

PRVC is currently planning their Veterans Day Ceremony for November 11 at Quantico National Cemetery at 10:30 a.m., according to a release.