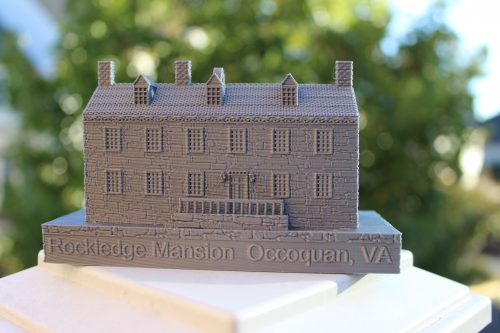 Occoquan ornament to displayed on Governor’s holiday tree in Richmond

A holiday ornament from Occoquan will be displayed in the Governor’s Mansion this year.

According to a release, Virginia Governor Terry McAuliffe selected Occoquan as one of the localities to submit a handmade ornament, which will be hung on the 2016 Executive Mansion Christmas tree.

This year’s theme was “Home for the Holidays”, according to a release.

Local artist Vicky Somma was commissioned by the Occoquan Business Guild to design the ornament, stated a release.

“In 2014, Somma designed an ornament depicting the Library of Congress that was displayed on the Christmas tree in the East Wing of the White House,” stated a release.

More on the design of the ornament, from a release:

For the 2016 tree, Somma devoted her time and energy to designing the Rockledge Mansion, a historic Georgian home that was built in 1758 from stone at the request of John Balladine, a wealthy local industrialist.   William Buckland, a master builder and colonial Chesapeake architect, helped Balladine complete this historic project because they were interested in making Occoquan a port and industrial town.

This mansion on 9.9 acres of land was home to various entrepreneurs and in 1973 Rockledge Mansion was added to the National Register of Historic Places. The ornament is a 3-D model that is made of grey and silver plastic and displays the mansion in its entirety. Ms. Somma has been constructing 3-D ornaments and other pieces for the past couple of years. She is a computer programmer who was born and raised in Occoquan. Somma’s father, mother and grandparents have lived in Occoquan since1976.

Somma spent three weekends working on the 3-D ornament, which included taking photographs and mathematical measurements of the historic building. The mansion was restored and serves as a venue for weddings and other occasions to this day.

The ornament will be on display on the tree in Richmond throughout the holiday season.