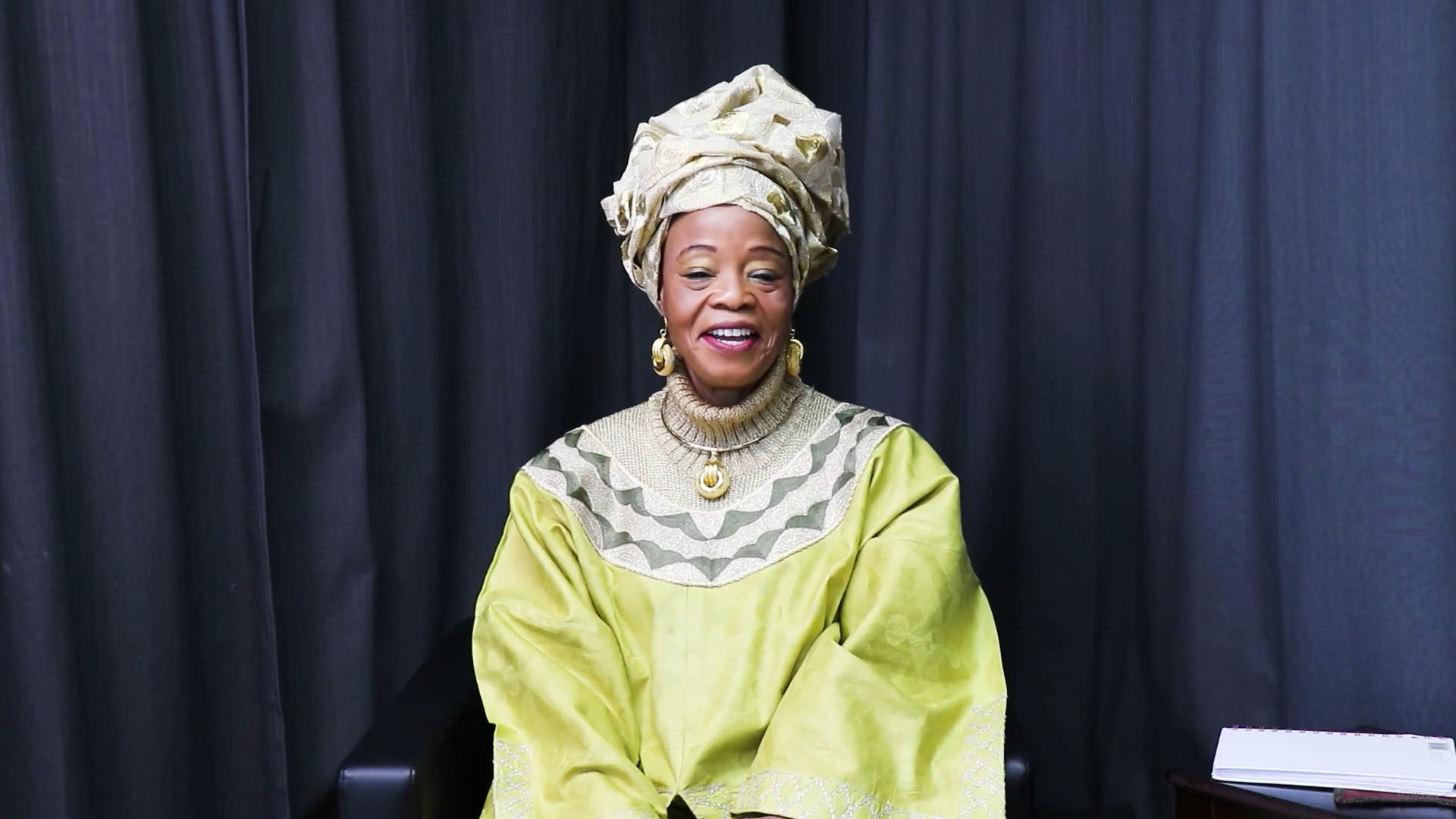 Medicine for children isn’t available, and people are dying for various reasons, including heart attacks and malaria.

Esther Moniba, a former Liberian resident, hopes to address these needs by having a clinic built.

Moniba shares her story and her goal in our most recent Community Conversations episode.

Here is the video interview:

This is the transcription:

ST Billingsley: Thank you for joining us today on What’s Up Prince William? Here for our community conversations, Studio 1A in Dale City, Virginia. Today we have Esther Moniba. She has a very interesting story about not only coming here to the United States of America, but also what she’s wanting to do here in the future. Thank you very much for being on our program today.

ST Billingsley: So what do you do right now?

ST Billingsley: Gotcha. And so you really work with people who need serious care?

Esther Moniba: Yes. Seriously sick people, both in the hospital and I also go in the home and take care of babies and adults that are on the life support machines.

ST Billingsley: Oh, gotcha. So you have a very interesting story about coming to the United States.

Esther Moniba: Yes, I do.

ST Billingsley: So I’ll just let you go ahead and take it from there.

Esther Moniba: Okay. Like I said, my name is Esther Moniba. I’m a born Liberian citizen. I was born in Liberia, but I’m a US citizen. I came in the States, 1983. I was born in Liberia and grew up in a little village called [inaudible 00:01:24]. At the age of eight years old, there were two Peace Corps white ladies that came in our village to help out. Those days, the United States used to send Peace Corps to help out in the villages. So the two ladies that came in my village, they took me. It was not adoption really, but they just fell in love the way I was very active when I was growing up. So they took me from my parents at the age of eight years. And I was living with them.

Esther Moniba: Both of them were nurses. One of them came from Chicago. Her name was Anne, Susan Anne Davis. And another lady came from New York City. Her name was Marilyn Magee. So these two lady taught me so many things when I was growing up. They taught me how to give medication to patients. They used to bring gauze to do wound care. They’d pour medicine in little cups to give to the villagers and the kids and everybody. So I lived with them throughout my life. And I always used to tell them that I am going to be a medical doctor, a surgical doctor. That was my dream in life. Unfortunately, 1969, I was to come with them into the United States. Unfortunately for me, they went to East Africa to see Mt. Kilimanjaro. And then they got killed in the train crash.

Esther Moniba: From that time, I didn’t know what to do because now I was not used to my Liberian culture. I could not live with my mom and getting used to everything they do there, because these people had me from the age of eight years up to 15 years. So there, I was stranded. Now my blessing power was that the lady that really used to take care of me, Susan Davis, from Chicago, her brother came to Africa for her funeral because she told them that they had to write a statement to say that in case if I die, where I should be buried. So Susan’s love for me and my villagers made her to sign the paper that in case if she should die anywhere in Africa, they should bury her to my little village, which is called Bensonville. Her dream was to build a clinic to help the sick people, to help the poor people because back home, the medical facility, we don’t have much care over there.

Esther Moniba: So when she died, her brother, Mr. Michael Davis from Chicago came all the way to Liberia. And they buried Susan right before my school building in Africa. From that time on, I didn’t know because Mr. Davis, he was not in the position to bring me to the United States. And that was Susan’s dream to bring me here because I wanted to be a surgical doctor. So when that happened, Mr. Davis sent me in the boarding school where I met another Peace Corps that were over there that were helping me. And then the tuition became so high, I was not able to pay. So for one year I stayed in the boarding school. And then I used to paint buildings, haul rocks, plant flowers in order to be able to keep myself in the boarding school for the following year.

Esther Moniba: So 1979, I came down from the village to the city. And then 1983, my ex-husband and I met. He came to Africa and then he told me that he would bring me here, where I was having a lot of promises that everything was going to be okay for me to do what my wish was, to become a surgical doctor. Unfortunately, I had my son, he was nine months old when we came. But everything that I was promised was a failure. I went through a horrible divorce, and I ended up with three children. And then I raised my three children by myself, and put myself in nursing school. I have been struggling, but I never gave up.

Esther Moniba: So now, my dream is, I want to make Susan’s dream come true by having to build a clinic in Liberia, because that was her goal and that was her dream. I’m therefore asking for help. I can’t do it by myself. I need help from everybody. So when I met Steve, I explained it to him and he told me, he said, “Well, let’s go and see what we can do for you.” I’m therefore out here, I’m single. My kids are growing. I’m working at the hospital and working in the home just to make ends meet. But my dream is to go back to Liberia and build that clinic, because that was Susan’s dream.

ST Billingsley: So it seems like that’s your dream now also.

Esther Moniba: Yes. That’s my dream, to build a clinic.

ST Billingsley: But you say that in Liberia, in your village which you’re from, what kind of needs do they have there for the clinic?

Esther Moniba: Well, the needs that they have there is that they don’t have medicine for kids. You know, like the kids can die. People can die out of heart attack. People die out of, they call it malaria. There’s no good food for them. There’s no hospital actually from my village, there is no hospital there. And now, right now, even in the city, a lot of people are dying because they don’t have medication for diabetes, high blood pressure. And those are the kind of things that I want to do. Something that we can take to be a minor thing in the United States is what’s killing them over there.

ST Billingsley: So what about, I’ll call it basic first aid type needs? Is that a big need there also, or even teaching?

Esther Moniba: We do need everything. There’s a first aid need. Like, kids can be play and fall down, scratch themselves. There is nothing that they can put there. So some of these wounds become infected. And then that just kind of like either paralyzes or even kills them.

ST Billingsley: So the other thing, you saw a little bit of talk earlier. What’s your idea for bringing even some basic sanitary and first aid education to them?

Esther Moniba: That’s one of main goals. One of my main goals is not just only building a clinic to heal them, but I want to teach them. Because my last time I was there was in December, the gone December. And I found out that even you go to the market, they have food that are not good for them to eat. Those that are dying of diabetes and high blood pressure, they have no knowledge. And that’s one of my goals, to go there and teach them how to maintain themselves, how to take care of their health that will even prevent them from going to hospital or other places.

ST Billingsley: Well, you definitely have a very inspiring story about overcoming adversity and not letting it stop you from what you want to do. And I have a feeling you’re going to be very successful on your next endeavor here.

Esther Moniba: By the help of God and everybody.

ST Billingsley: All right. Well, thank you very much for being on our show today. And we like to definitely, at some point, we’ll have you come back and talk about where you are or even if you get there and then come back and talk to us about how it’s going.

Esther Moniba: I will surely do that. I might be going in June because I have a friend at the hospital. I’m trying to get the hospital to help me also. So they already did the print out of the building of the clinic. And then he has the blueprint and everything. So the same program they have for Haiti, that’s the program I’m trying to get on.

ST Billingsley: Well thank you very much for coming in and talking with us today.

ST Billingsley: And thank you for joining us today on What’s Up Prince William?

Esther Moniba: Thank you so much.