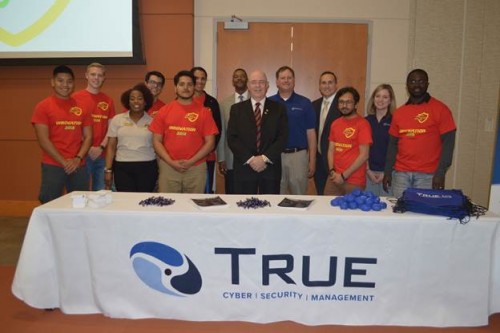 According to a release, the event was organized by five students in NOVA’s cybersecurity and information technology program, and was hosted at the new Regional Center for Workforce Education and Training (RCWET).

“When I went to the hackathon RamHacks in Richmond last year, it was such a great experience that I said to myself if they can do it, we can too. After that, I began placing together students who were dedicated to making the NOVA student hackathon experience a fantastic one. For the past seven months, our team worked very hard to make this event as professional as possible,” stated Thomas Mitchell, NOVA-Woodbridge student and president of the inNOVAtion hackathon team in a release.

Participants in the competition stayed overnight on campus, and worked on several hacking challenges created by True IA, General Dynamics, University of Maryland University College, Rapid Cycles Solutions, (ISC)², and RPI Group, according to a release.

Some of the challenges included created apps, and data programming, according to a release.

NOVA President Dr. Scott Ralls stated that the hackathon event fits within the college’s role as the ‘Most Digital Community College’ for 2014-2015, according to a release.

“NOVA is one of the top cybersecurity and IT community colleges in the country. In the last year, our cybersecurity program has grown from having 56 students to now 744. We are proud to be NOVA. As a technology driven community college, we rank number two in producing IT associate degree graduates in the nation. inNOVAtion is only the first of many hackathons we hope to host at NOVA,” stated Ralls in a release.