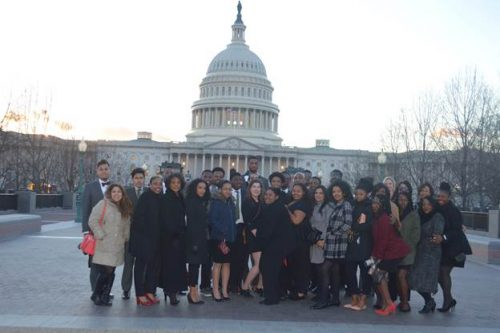 According to a release, the screening of the film was hosted by United States Senators Mark Warner, Tim Kaine, Sherrod Brown, and Congressman Bobby Scott in Washington, D.C.

“Over 200 individuals from community groups, student and non-profit organizations across the region were selected to view the three-time Academy Award nominated film in the Congressional Auditorium of the United States Capitol Visitor Center,” stated a release.

During the event, Margot Lee Shetterly, the author of the book “Hidden Figures: The American Dream and the Untold Story of the Black Women Mathematicians Who Helped Win the Space Race” spoke to students, and Warner and Kaine spoke about the importance of students breaking through barriers and pursuing careers in STEM fields.

“Nearly 60 years ago, these three women of color (Katherine Johnson, Mary Jackson and Dorothy Vaughan), had to break through both sexism and racism to show that their innate intelligence could overcome any barrier or burden. Because of their work, John Glenn managed to be an astronaut and most importantly to come home safely. I hope this story of three great Americans and Virginians will be an inspiration to young people all across our country, that there is no goal you can’t achieve if you work hard and stay true to your dreams,” stated Kaine.

A vast majority of student members from the WISE and MAN UP organizations at NOVA’s Woodbridge Campus are currently pursuing an associate’s degree in cybersecurity and/or information technology. WISE, an organization that empowers women through professional and academic enrichment, while improving self-esteem and self-advocacy, assists students with pursing academic, personal and career goals. MAN UP, a mentoring and leadership development program for minority men, was developed in 2013 to increase retention, graduation rates and the academic performance of NOVA students. Richmond Hill, MAN UP founder and program coordinator, said receiving an invitation to attend the private screening introduced a new and exciting experience for students.

“This was an opportunity for our students in the MAN UP and WISE programs to be a part of a time in history,” said Hill. “Our NOVA students were very excited to be in the same room as so many government officials and individuals who contributed to the film. This unique and fortunate experience has given each student a sense of pride to be a part of this amazing event. For some of them, this was their very first time attending a private screening and visiting the Capitol.”

“After viewing Hidden Figures, I saw so many emotions from our WISE mentees – clapping, yelling, crying and laughing that left me inspired,” Tykesha R. Myrick, WISE founder and program leader said. “The overarching theme we collectively have from this extraordinary film and unique experience is nothing is impossible, and someone has to be the first.”