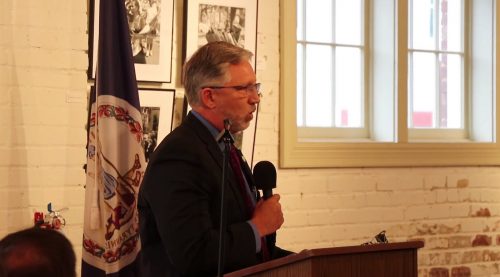 The task could become more difficult for employers.

The United States Department of Labor (DOL) recently announced that the unemployment rate dropped 3.9 percent in April, the lowest it has been since 2000.

This means that the there are the same number of job seekers as there are jobs posted.

“That one to one doesn’t mean that everybody who comes in to apply for your jobs has the skill set that you’re looking for,” Ralls said.

Ralls discussed the obstacles businesses are facing at the breakfast, which was held at The Candy Factory.

Traditional higher education can be one of them, according to Ralls.

“A lot of times we’re not nearly as bold as we should be in meeting those challenges,” he said. “You move much faster than we do in higher ed, and that can be a real challenge.”

As it focuses on the three areas, the community college is “pursuing” programs, partnerships, people and places.

“We have developed joint admissions between our two institutions, because what’s unique for our institution is over half our graduates who transfer go to George Mason … What will happen at NOVA for the first time next year is in 21 majors, you can be jointly enrolled in both institutions,” Ralls said.

NOVA students will receive a joint ID from the community college and GMU. They will also have access to George Mason’s resources.

The partnership seeks to address two challenges: the cost of higher education and the excess of credits transfer students take.

NOVA is partnering with Amazon Web Services for the third program, Cloud Computing.