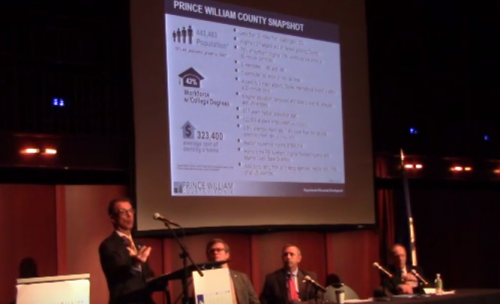 What does the new Northern Virginia economy look like?

Change is coming to the Northern Virginia economy.

That was the theme of a panel discussion hosted by the Prince William Chamber of Commerce at George Mason University’s Science and Technology Campus in Manassas.

Prior to the panel, Dr. Terry Clower, the Director of the Center for Regional Analysis at George Mason University, spoke about important data that will shape the regional economy.

“We need to see a more diversified economy, one that’s less federally dependent. The good news is that our businesses are apparently figuring a way to start to do this,” said Clower.

In the region, many of the jobs are coming from professional and business services, as well as retail and tourism, according to Clower. But for Prince William County those numbers are a bit different, according to Clower, with many of the jobs in the county not only coming from business and professional services, but in the transportation and utilities industries as well. There has also been growth in Prince William County in the construction, education, and health services industries, said Clower.

According to Clower, Prince William County has the infrastructure to begin building that diverse business community that will be able to weather changes in the economy.

“We also have to keep in mind that balance in jobs that we’re creating…the counties out here, like Prince William, have an opportunity to have a diversified, multi-tier economy that includes all sectors,” said Clower.

How immigration plays a role

Immigration is a topic that has been on the forefront of discussion lately in the media, and Clower spoke to how immigration is impacting Virginia’s economy in a way that some may not expect.

“I think it’s important to talk about what’s going on in our population…our most recent data, which looks at the 2014 to 2015 period…if you did not have international migration into this county, you would have lost population. Immigration is key for our success. We talk about this area being one of the smartest areas in the country. We have, on average, the highest education attainment. 40% of our population that have Master’s degrees or above were not born in the United States, in this region. So it’s a little bit of a different immigration picture than what is sometimes cast in our political arguments when we’re looking at this,” said Clower.

Further investment in transportation is needed

For Clower, another key to continued success for the region and the county’s continued growth is an investment in transportation infrastructure.

“They key reason we need to be investing in transportation – whether it’s Metro, whether it’s I-66 or any of these other connector roads that get us around – is because our businesses need access to labor. The general rule in economic development is an employer wants to see their employees, on average, not commuting more than 30 minutes,” said Clower.

Clower stated that of the more than 400,000 residents that live in the county, only 43,000 people live and work in the county, 64,000 individuals outside of the county come to Prince William to work, and that more than 140,000 people leave the county each day to head elsewhere for work, demonstrating the necessity to have a solid transportation infrastructure.

The rise of the ‘gig’ economy

One of the biggest shifts ahead for the workforce is that people are predicting that by 2030, 30% of jobs will be considered ‘gig’ jobs, said Clower.

And with the advent of the ‘gig’ economy, Clower pointed out concerns that the region was overdue for another economic downturn.

“We’re overdue for a recession [in the area]. And one thing I can tell you with absolute certainty is that we will have another recession,” said Clower.

“We need to do a better job of branding ourselves, to ourselves,” Buchanan said.

In case you missed it

A few months ago the Prince William County Department of Economic Development hosted an event with a similar tone with the Washington Business Journal – the Greater Washington’s Crossroads of Innovation Science & Technology. The panel, also held at George Mason University’s Science and Technology Campus, talked about economic development in Prince William County, and how to bring companies at the forefront of innovation, science, and technology industries.