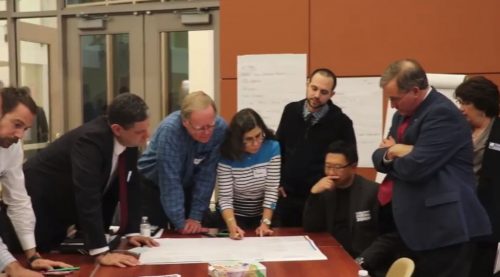 The future of North Woodbridge was in the hands of Prince William County residents last Wednesday and Thursday.

“We are here at the table. We are wanting to work with all of you, as stakeholders in our community, to do what? Well to, quite frankly, remake Woodbridge,” Principi said. “And I call it ‘New Woodbridge.’”

“New Woodbridge” stands on three principles — making the best planning decisions and offering multiple transportation solutions are among them.

“We are talking about a $4 billion high-speed rail line coming through Woodbridge that would serve intercity passengers between Richmond and Washington, D.C.,” Principi said. “That would go right through the Woodbridge VRE station, as it’s currently planned.”

Fast Ferry and PRTC, which is being remade, were two other options Principi mentioned.

The third focus of “New Woodbridge” is the neighborhoods.

“We have a legacy that we need to ensure does not exist again, and that’s the tall grass, the broken windows and graffiti,” Principi said.

They also mapped out what they think the area should look like.

Ryan Horner, an event volunteer, said a lot of material was covered in the group discussions.