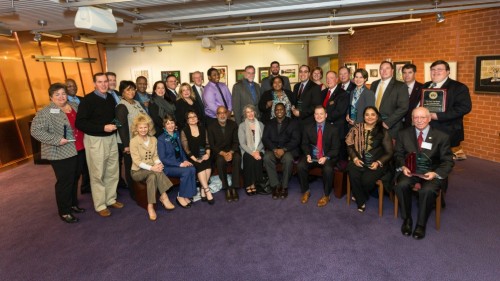 It was a night of celebration and excitement last week at the Prince William Chamber of Commerce’s annual Business Awards, as local non-profit organizations were among those recognized for their contributions to the community.

Two non-profits were given the Agnes L. Colgan Community Service Award, which came with a $1,000 check that the groups can use to continue their work. Cardinal Bank sponsored the community service award, according to a release.

There were two categories for the award – health and human services, and arts and education.

The winner of the health and human services category was Habitat for Humanity – Prince William County.

More on the work that Habitat for Humanity does, from a release:

Habitat for Humanity of Prince William County is dedicated to eliminating substandard housing in the Prince William, greater Manassas community. In the last year alone, they completed 25 projects that led to safe structures for 15 local families and beautiful and functional neighborhood common areas to improve the local quality of life. In their last fiscal year alone, $81,762 was invested in construction materials and 12,600 volunteer hours were served.

In one home, the HVAC system was replaced for a local Veteran and his son. Additionally Habitat replaced two roofs, repaired floor joists and stopped plumbing leaks at a home where mold was becoming an issue.

It’s been an exciting winter for Habitat as they closed their Manassas Re-Store and opened a new one in a much larger facility. Later this year they will open a brand new Re-Store in Woodbridge. In addition, they look forward to finishing rehab work on a home in Woodbridge and placing their 16th family partner.

For the arts and education category, Christ Chapel Academy was the winner.

More about Christ Chapel Academy’s work, from a release:

Christ Chapel Academy’s motto is “Engaging Learners, Unleashing Leaders.” To do that, they do much more than educate students in the conventional sense. Students are challenged to become servant leaders and give back to the community through the RACE initiative (which stands for: Reach. Act. Care. Engage).

In 2015 RACE spanned 9 service locations and the entire high school participated. Proving that you’re never too young to serve, even the preschoolers were involved, singing at a local assisted living facility and raising $3,300 for St. Jude’s research through a trike-a-thon.

Student projects touched nearly every aspect of the community from the homeless to the elderly to cleanups through Keep Prince William Beautiful. They even volunteered with Habitat for Humanity.

For their commitment to educating students on how to be engaged and concerned citizens, we are pleased to present Christ Chapel Academy with the Agnes Colgan Award for Arts & Education!